A Sport Which is Fast Becoming Popular on This Coast.

An "Examiner" Reporter's Tour Among the Bicycle Authorities of this City.

With joy I mount my silent wheel,
And over hill and valley steal,
Thrilled with thought that unto me
Is given boundless liberty.

Thus wrote a young poet who was enamored of the glorious sport of bicycle riding, and that sentiment, so delicately expressed, is daily echoed by thousands of bicycle enthusiasts.

The fear that they will appear masculine or ungraceful, or that it is hard to learn, deters many ladies from learning to ride, but if the truth were known it is one of the easiest and most graceful accomplishments a lady can acquire.

The cost of a good bicycle at first looks large, but it is not only the cheapest and most healthy mode of conveyance, but in the majority of cases the wheel soon pays for itself and is a great time saver.

In order to fully answer numerous queries about bicycles, an EXAMINER reporter recently called on several firms which make a specialty of this line and learned many things which will be of interest to the readers of the Monarch. 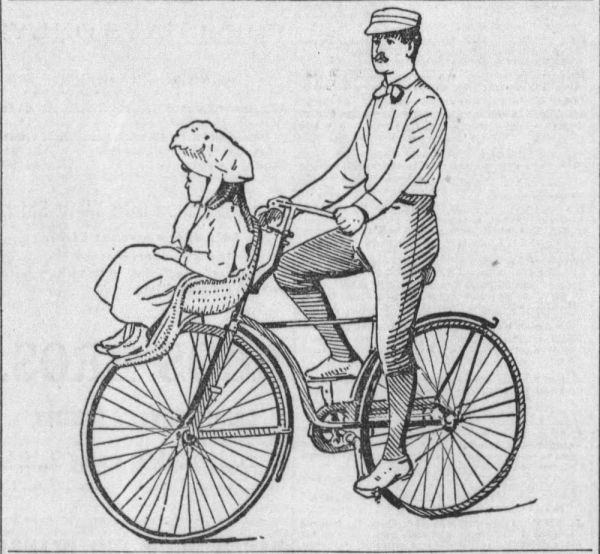 At the handsome hardware establishment of Osborn & Alexander, corner of Market and Fremont streets, an EXAMINER man was courteously received by Mr. Cobden, the efficient manager of the bicycle department of their large business. In this department can be found everything in the bicycle and tricycle line which was ever introduced on the Pacific Coast and in great profusion. Here the reporter was shown samples of the world-famous Columbia wheel, a machine whose name is well and favorably known to all who indulge in the sport.

At a recent bicycle turnout in Baltimore, in which 800 wheels were in line, 623 of them were Columbias. "Nor is the public confidence in the Columbia misplaced," said Mr. Cobden, "for it is a handsome, durable wheel and easily repaired if broken (which seldom happens if properly taken care of). Columbia wheels are simple in construction, and should any parts break duplicates can easily be obtained from the dealer. We have recently had orders for Columbias from Honolulu and Japan, where a demand for bicycles was created by an American gentleman touring those countries on his wheel. Besides the Columbia agency we have the agency of the celebrated American Rambler, the Western Wheel Works of Chicago and of the Indiana Bicycle Manufacturing Company, which has an enviable reputation for turning out good, serviceable wheels. We also hold the agency for the celebrated Star bicycle and other well-known wheels. The demand for bicycles on this Coast is considerably on the increase, and it is safe to say that in a short time the sport will become as popular here as it is in the East or England. Women learn to ride easier than men, and when they get over a little natural timidity at being seen on a wheel they enjoy riding as well as the men. These light Columbia Safeties are just the thing for ladies and women who have suffered from nervousness and the many weaknesses to which women are prone would soon acquire health if they would only pluck up courage and try the bicycle or tricycle for a short time.

The firm of Osborn & Alexander is well known to the people of California as a square-dealing concern, which can be relied upon to fulfill its contracts to the letter. It carries a splendid stock of bicycles and mechanical goods, which cannot be excelled on the Pacific Coast, and the experienced and courteous employees are ever ready to exhibit their goods to customers. The members of the firm are energetic representative business men, who have long been identified with the welfare of this city. In the third story of the building, and connected with their bicycle department, is a splendid riding school, where customers are taught by experienced teachers to master the wheel in a short time.

At No. 112 Golden Gate avenue is situated the establishment of the well-known dealer and enthusiast, Edwin Mohrig, who besides being a wheelman of twelve years' standing has taught and induced many ladies and gentleman to indulge in the great sport of wheeling. Mr. Mohrig is the only man who ever successfully operated the purchasing club plan on this Coast and to his perseverance many young men are indebted for the wheels they now ride. There are fifty members to each club, and the plan pursued is as follows:

The club being complete, a drawing is held each Saturday afternoon of the club's existence of fifty weeks, as follows:

Each member's number (from one to fifty), written on a card and sealed in a blank envelope, is placed in a box, one of which is drawn by any member present. The holder of the certificate bearing the number drawn receives his bicycle the same day. His number is, however, destroyed, and all subsequent drawings are held only with the remaining numbers.

Each member goes on paying his dues, however, whether he has drawn his wheel or not, until the last wheel is paid for. He thus secures a good wheel on easy installments and runs a chance of getting it the first week after joining. If, after paying one-third the price of the wheel, or seventeen weeks' installments, he wishes to take his wheel on the regular installment plan, he can do so by paying $15 per month. No installments are forfeited for non-payment of dues, but are held to the member's credit for two years. Mr. Mohrig is now organizing a club, which will begin drawing on or about October 1st.

Mr. Mohrig is a splendid authority on bicycle matters and has an enviable reputation as an upright, straightforward business man. Besides teaching riding and letting out wheels, he is the sole agent on this Coast of the Stover Bicycle Manufacturing Company of Freeport, Ill., and also for the Capital Cycle Company of Washington, D. C., sole importers of the celebrated Psycho cycles.

The oldest bicycle school in San Francisco is the Cyclery, which is situated on Stanyan street, opposite the Haight-street entrance to the Park. Here an EXAMINER man was courteously received by Mr. Devany of Devany, Hopkins & Co., the proprietors of the establishment.

"Yes, bicycle riding is booming now," he said, "and is becoming so popular that hundreds of ladies are learning to mount and ride. We have a regular teacher here, Mr. Lee, who holds the 24-hour record, and has taught between 200 and 300 ladies to ride, to say nothing of many hundreds of gentlemen. We have the track in the ball-grounds, and thus our patrons are assured of perfect privacy. Besides our classes we have a large number of wheels which we let out to parties wishing to ride through the Park. We also are agents for the celebrated Coventry Machinists' Co.'s Swift Safeties and Club Cycles, which are so popular in this country and in England."

Devany, Hopkins & Co. began business four years ago, and it was freely predicted that they would not succeed. Their pluck and honesty carried them through, however, and they will soon enlarge on plans which Mr. Deyany is now getting in the East.