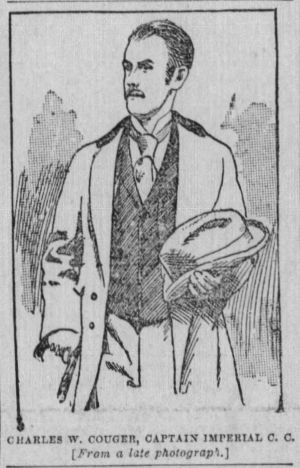 The Imperial Cycling Club, under command of Captain Conger, has a scorch run to San Leandro to-morrow, leaving Fruitvale about 1 o'clock. Rain will of course stop the run.

The resignation of Charles W. Conger as captain of the Imperial Cycling Club has been handed in. James S. Egan or E. C. Douglas may succeed him as captain.

To San Francisco Cyclers Who Are "Biking" From Vancouver.

PORTLAND, OR, April 30 - Walter C. Howe and Charles W. Conger of San Francisco, who are making the trip from Vancouver, B. C., to San Francisco on bicycles, arrived here to-day. They have followed the railroad track most of the way, the roads being very muddy, They have been on the way seven days, and will stop a week in Portland to rest.