To descend a hill on a bicycle, either with feet off the pedals, AKA free wheeling, (sometimes with "legs over") or by using a coaster brake.

There are some sixty-eight miles of macadamized streets in Oakland, which are generally level, and, as the boys say, not "up hill both ways, as on this side of the bay." They have little chance to "coast," the Cemetery avenue, [Piedmont avenue] Clairmont avenue and Alcatraz avenue, out of town, being the only places where "legs over" can be indulged in.

The Claremont coast has been very popular with Oakland wheelmen lately, and several riders were enthusiastic enough to make three trips out and back from Oakland one evening last week.

The gravity railroad at Piedmont is an apology for the exhilarating feeling of a delightful coast down a good and not too steep grade.

Not a run, but rather a "climb and coast" this time was the programme of the Bay Citys yesterday. The 8 o'clock boat to Sausalito found the boys all ready for the ride, which they started at Ross Station, and walked and climbed to the very top of the mountain, about two hours from the station. A register in the book at the top, lunch, a survey of the really magnificent view from that point, the great ocean on one side, San Francisco and San Pablo bays on the other, with the pretty valleys at the base of the mountain, and then the descent. It may have taken two hours to reach the summit, but considerably less than half that time was necessary to get back. The scorchers went on via Corte Madera to Sausalito, while the others took the train at Ross Station.

Monday morning I left Chular at 9 o'clock, passed through the towns of Gonzales, Soledad, and had lunch at a ranch. Then I pushed on through Cholone, arriving at the little town of Jolon at 4 o'clock in the afternoon. The roads were very fine on this day's run, and the seven-mile coast into Jolon will be long remembered. 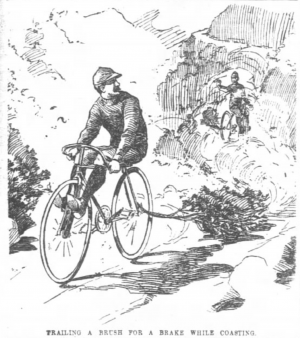 TRAILING A BRUSH FOR A BRAKE WHILE COASTING.

From here on to San Luis Obispo the trip was monotonous and wearisome except the coast down the Cuesta grade. Luckily I had rubber strips on my tires so that I could use my foot as a brake. Without this protection my light racing tires would hardly have reached Mexico.

"There are two separate inclines, both very steep from this side, but offering long, gradual coasts on the other. For three or four miles you wind slowly down the side of the mountain over hard, smooth roads.