John E. Alexander commenced riding in races only last year. He took second place in his maiden race at Alameda, May 30th. At the same place September 5th, he won his best race, a half-mile handicap, with fifteen yards beating some of the the best riders of the coast on the home stretch. September 9th at San Jose he won second place in both the one mile and five mile scratch races. At Stockton September 16th with a twelve pounds heavier wheel than his competitor he ran second to D. L. Burke of Los Angeles, being beaten by but a wheel's length. The time of this race, 1:12 2-5, was, at the time, the coast record. Alexander hails from San Jose and attends the Stanford University.

The Alexanders and Pollard arrived the next day, and we greatly enjoyed exchanging stories and comparing notes. Jack Alexander gave the following account of his trip, to which we listened with an interest born of sympathy.

"I left San Jose Thursday, July 12th, at 11 A. M. The first day's ride took me to Hollister. This is some eight or ten miles off the road, but as I had four days in which to make 200 miles, I wished to take in as much of the country as possible. Early next morning I climbed the San Juan mountains, which looked bad enough that early in the trip, but which were a Paradise compared to those encountered later. At the foot of the grade I again wandered from the straight and narrow path by taking the road through Salinas.

"From here to Kings City, a straightaway stretch of fifty miles, over hard adobe roads, the winds blow a regular hurricane at your back. Sandclouds laden with pebbles and weeds envelop vou with sudden fierceness, and large bowlders by the wayside seem anxiously waiting for a larger gust, so that they, too can join in the procession.

"Borrowing a few sticks from a neighboring fence, I fixed my coat so that it would spread out like a sail. In this way I floated along mile after mile, scarcely pedaling ten miles out of the entire fifty. 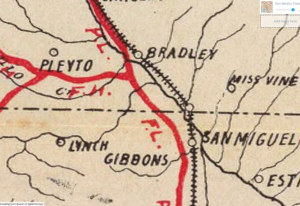 Pleyto to San Miguel, from "The Cyclers' Guide and Road Book of California", published two years later in 1896

"From Pleyto to San Miguel, twenty miles distant the road loses what good reputation it may have gained in its former course. For the first five miles the scenery is lost in the toil up and down the mountain side, and mostly up at that. At Kings City I had been instructed regarding the route. After crossing a bridge and passing two houses you were to turn to the left and from there make no turns at all but were to keep the right-hand road, there only being one other fork and that about half a mile further on. From here on to San Luis Obispo the trip was monotonous and wearisome except the coast down the Cuesta grade. Luckily I had rubber strips on my tires so that I could use my foot as a brake. Without this protection my light racing tires would hardly have reached Mexico.

"At San Luis I met my brother, Howard Alexander and George Pollard, who had arrived safely the evening before. One of the best arrangements we had made for the trip was in having a trunk of necessary articles sent on from town to town ahead of us. So in the evening, after we had disappeared in our rooms for a short time, you would never have thought we had been traveling all day over hot, dusty roads. It was late in the morning when we left San Luis Obispo. We took a longer, and as they told us, a better route to Arroyo Grande. But If the other is worse I pity the poor wheelman who is ever luckless enough to go that way. 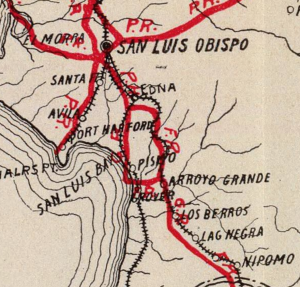 San Luis Obispo to Arroyo Grande from "The Cyclers' Guide and Road Book of California", 1896

"Everything went well until we came to the Santa Maria river bed, the place where the water must have turned into sand, and before the conversion there surely was plenty of water. They call it two, but I will wager we walked fifty miles in crossing it. At least that is how it seemed to me. First you climb a barbed-wire fence and tear your clothes trying to find it harder on the other side. Then you climb back again and settle down to steady walk, dragging your wheel after you. The fence ends, and you seem lost in a great desert. Walking in the wagon tracks you think the other bank will bring relief. You struggle up the other side only to find the sand stretching on and on in the straight and narrow way, the way you must go.

"But it must all end at last, and we were repaid at Santa Maria by one of the best meals on the trip. Perhaps we called all of them the best, for it only takes a few days on the road to change a consumptive into an athlete. In the sentiments of the great humorist, a few weeks' trip awheel would return an Egyptian mummy to its pristine vigor and give it an appetite like an alligator.

"We were escorted on our way by Gus Pene, A. E. Cox and Bert Coblentz. Leaving them some ten miles out we wended our way up the valley over a very sandy road. One thing which a cyclist would like to see spread all over the country is a set of distance posts, noting how far you are from the next town. It's a failing in this country for no one seems to know how far he is from any place excepting it may be - well, as I was saying we would inquire distances. One person would say ten miles. Inside of the next 300 yards another would answer fifteen. Rather slow traveling, and we often vented our feelings on the surrounding atmosphere.

"Our route was over the steep grades of the Santa Ynez, being shorter, and if the other through Los Almas [sic] could be worse, then this is the better. So they told us, at least. 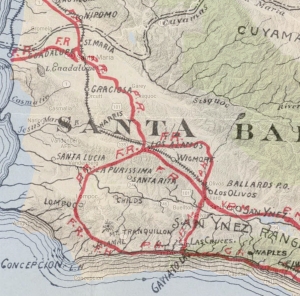 Santa Maria to Santa Ynez, from "The Cyclers' Guide and Road Book of California", 1896

"There are two separate inclines, both very steep from this side, but offering long, gradual coasts on the other. For three or four miles you wind slowly down the side of the mountain over hard, smooth roads.

"Here we were overtaken by darkness, but as a full moon was rising, the ride from the summit to Los Olivos, six miles away, was one not to be forgotten. After leaving Santa Ynez, five miles from Los Olivos, the road becomes most monotonous. You wind up a long, barren canyon, over rough and dusty roads filled with loose rocks and bowlders. The creek bed, where water may once have been, but which now looks as if it had forgotten what even vapor might have been, winds from side to side of the gully, leaving high abutting ledges. Up and down these we went in the most monotonous order, every new one the exact counterpart of the one just passed. As far away as you can see the same dust, rocks and sagebrush are outlined against the bleak and barren mountain-side. For the entire distance there are no houses to be seen except where the stage stops for changing horses.

"Nothing is ever raised here except on windy days, when they raise a horrible cloud of dust. But as the wind seldom blows they make a failure of even that. About three miles from the summit the Cold springs' stopping place is reached. It is like an oasis in the midst of a desert. Here by chance are a few trees and a tiny trickling stream of water. Here we lunched, and then resumed the same course to the top. Then began our steep descent. But about two miles down the road changes and is slightly elevated for another two, when once more it plunges downward into the Santa Barbara valley. Just before reaching this slight rise I suddenly suddenly discovered that How and Polly had dismounted. I shouted, but they answered that everything was all right, so I continued onn [sic] until the road again took its downward course. From this spot I was enabled to see the place where I had left my companions. Soon I saw an immense cloud of dust, and How and Polly turned the corner dragging the famous brush pile behind them as a brake. They had struck the incline and stopped. Then they dragged it for some hundreds of yards, until they were compelled to cut it off in order to navigate. They thought to surprise me, but the joke worked the wrong way.

"Then I went on, back-pedaling most of the way down the steep and dusty road. At the bottom I waited and it was nearly an hour before the others put in an appearance. They were white with dust. At the beginning of the second grade they had tried the trick again and with great success. Only the one who rode behind was lost in such a cloud of dust that he was totally covered. Then the brush in front would smooth over the road so that the other would ride into chuck holes without seeing them. Still they said they would be willing to repeat the operation. We arrived late in the afternoon at Santa Barbara, where we expected to meet Lew Hunter and W. R. Lovegrove, but were obliged to push on to Los Angeles before seeing them."

J. E. Alexander of San Jose starts on a tour to the Yosemite the latter part of this month.