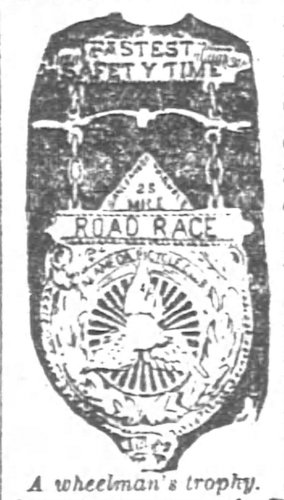 The road was heavy on account of the rain, but as the sun came out it gradually improved. The time for the first lap was slow, but later on the pace became very fast. At the beginning of the last lap Foster, Osen and Waller were close together, with the others spread over a long stretch of back country. A desperate finish ensued. W. F. Foster, on a Victor cushion tire safety, winning by five yards in 1h. 25m. 57s., beating the previous coast record by eight minutes and two seconds. George Osen finished recond, F. Waller third, F. G. White fourth, Al Alcayaga fifth, A. L. Pickard [O. L. Pickard] sixth, J. L. Ives [J. F. Ives] seventh E. E. Stoddard eighth, D. Marshal ninth and W. E. Lee tenth, all of these beating the former coast record of 1h. 33m. 59s., made by T. G. Elwell [F. D. Elwell] June 2, 1888.

Waller's corrected time was 1:24:57, which gave him the medal for the best safety record. It is said that he has only been riding the wheel three months.

The two scratch men, Ives and Stoddard, rode to beat one another, and both saved themselves for the finish. The result was a grand race on the last lap. Ives had the pace of his opponent, however, and by a well-timed spurt crossed the tape first. After the race the prizes were distributed by the officers of the Alameda Bicycle Club, under whose auspices it was held. It was admitted to be the best road race ever witnessed in California.