... Wilbur F. Knapp and "Senator" Morgan, who raced abroad last year in the American team, when they won 102 out of an actual 109 scratch races.

Knapp says he will possibly lower all coast records on Sunday in the handicap races, as he will start from the scratch in the two handicaps in which the five members of the team take part. Since starting from Omaha twenty eight races have been won by Jennie Oaks out of 33 races run by the three ladies, and in every race the manager, John J Hardin of baseball fame, offers special inducements for each rider to win. Mr. Knapp would like to get in a race with a trotter for five miles, and would like to wager $500 that he can defeat any Stockton trotter at five miles. The local amateurs will probably escort the visitors to the ball park on Sunday and take part in two of the races.

Of all the interesting visitors who are here for the bicycle races there are none that eclipse Wilbur Funny Knapp. A decade ago he was as great a man on the bicycle path as E. C. Bald is now. In fact Knapp was the first American wheelman to become champion of the world. Today few wheelmen know that the humorous storytelling Knapp was ever a racer. For the past two years he has been in great demand as an announcer at race meets and today will see him decked out in his white suit with his white megaphone telling the spectators' about the races, and who won them, in his own funny way. Knapp arrived late Tuesday night, and the crowd at the smoker looked in vain for him nearly an hour. Fay Stephenson will aid him in the announcing on the circuit. 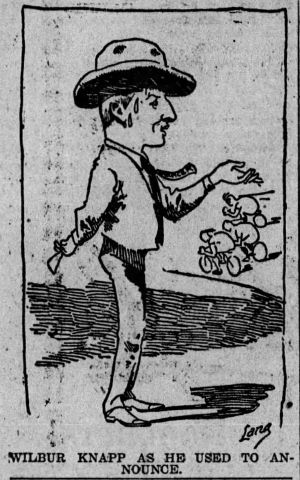 WILBUR KNAPP AS HE USED TO ANNOUNCE.
The Los Angeles Times, 21 Nov 1895

Wilbur Knapp, another old-time professional. Is a whisky salesman on the Pacific coast.

CYCLERS SETTLED DOWN. Old Timers Who Are Now in Business and Happy. 27 Jan 1901, Sun The Boston Globe (Boston, Massachusetts) Newspapers.com