San Jose to Be Captured by Them.

Champion Zeigler Will Not Ride.

The Californias Adopt a Special Uniform - The Ladies Not to Parade.

The California Cycling Club has adopted a uniform for the parade as follows; Gray knickerbockers, black sweater with club emblem, black shoes and stockings, navy blue cap with club emblem. Each man will also wear a silk red-and-white sash, the club's colors.

"We do not expect to carry off the prize, but will undoubtedly make a fine showy appearance," says Captain Brunt. They will carry their usual parade banners.

The Olympic Wheelmen will be quartered at the Westminster, and the Reliance Wheelmen at the Nevada House.

The Misses McKenney and Peet have returned from Alameda, where they have been enjoying several weeks. The bicycle played a chief part in their enjoyment.

Captain Brunt's scorch of the California Cycling Club last Sunday over the ten-mile straightaway saw eight entries, and of these three men rode it in thirty minutes. Edgeberg reached Haywards first, and this in the face of having had no training and riding a heavy wheel, carrying his coat, tools, etc. Their road race over the same course on September 30th will undoubtedly establish a new record. Levi D. Owens, the wheelmen's representative on the board of directors, was elected by a large majority on Tuesday last. His thirty-four-inch bicycle still be seen for the first time in the annual parade Monday. 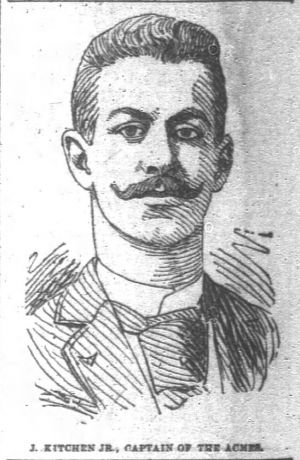 About thirty members of the Bay City Wheelmen visited the Oakland Trotting Park last Sunday, some for training purposes, while others were there merely as spectators or to urge their favorites to greater exertion.

Gardener of Napa, who recently won his novice race, is entered at the San Jose meet in class A. He is riding in good form and expects to take back with him a prize or two.

In practice miles at the Garden City track Messrs. McFarland, Moody, Seaward, Hardenbrook and Belloli of San Jose and Sherman of Hollister, have done it in 2:30. Moody and Seaward appear to be riding in best shape of all, and if not overtrained will make a handsome showing Monday.

Joe Rose, the Acme "Mustang," is doing fine work at San Jose in the shape of "jollying up" the cyclers and holding his own in the watermelon patch.

All of the Bay City Wheelmen's class A riders will enter the races of the Young Men's Christian Association meet at Alameda on September 15th.

The Bay City Club has thoroughly canvassed its members, urging each one to go down to San Jose and help swell the ranks, as they are anxious to win the prize for the largest number in line.

The Acme Wheelmen will hold a ten-mile handicap road race on Sunday, September 16th, over the straightaway course from High street, Alameda, to Haywards. Seven prizes will be put up besides a special time prize.

That cycling has got beyond the point where it is considered a fad is undeniable, and to be convinced you have only to walk along the principal streets to discover the cyclers darting in and out from the cable cars, bent either on pleasure or business, and in many instances combining them both. Years ago when a cyclist mounted on a solid tire was compelled to go to the ferry he was the laughing stock of the town, besides standing a fearful amount of jolting over the basalt blocks. With the advent of the cushion tire this uncomfortable riding was partly abolished, but not until the pneumatic tire was introduced did the cycler enjoy pleasure, even when on business errands. From early morn until late at night the cycler can now be seen on the streets, and the classes combined are from the errand boy up to the banker, clergyman and physician. Many prominent business men are ardent cyclers and enjoy numerous runs to the beach on summer evenings.

San Francisco can boast of having a goodly number of cyclists. It is estimated that there are fully 2000 wheelmen in this town, and about one-third are members of some club.

Oakland can perhaps claim to be the leading cycling town, owing to her many finely paved streets. A talk with a prominent wheeler of that town led him to say that he believed there were somewhere 2500 people who use wheels in that town, either for pleasure or in their daily business. This includes the many cyclers of Alameda.

San Jose boasts of between 400 and 500, and they say that cycling has just about commenced in that city.

The California Cycling Club will hold its next regular meeting at its clubrooms, corner of Folsom and Twenty second streets, on Tuesday, September 11th.

J. H. Dieckmann is working hard to secure new members for the Reliance Wheelmen, and as an incentive to work the club has offered a wheel to the member securing the most new members. It is reported tbat the wheel is almost within his grasp. 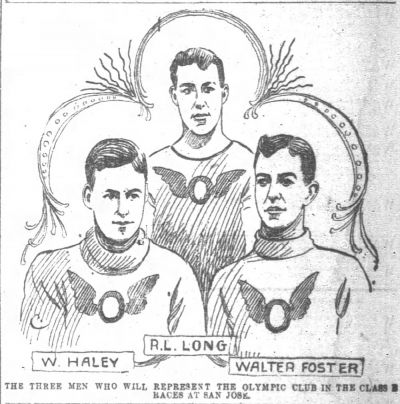 On last Monday the cornerstone of the San Jose Road Club's new clubhouse was laid, and in a short time they will be ready to receive their friends in their usual hospitable style. Otto Zeigler Jr., their crack rider, and the champion of the world in amateur circles, has given them a written promise that he will do no public riding until the formal opening of their track, consequently he will not appear on September 10th in any of the races.

The Olympic Wheelmen met Thursday evening in special session and voted to hold a race meet on October 2d, it being now fully decided that this day will be celebrated as Labor Day on this Coast. They will put up about $700 worth of prizes for Class A and B races.

A jolly party of Bay City Wheelmen; consisting of Messrs. Kerrigan, Hallett, Plummer, Sheldon, Stoddard, Cook And Lee, will leave here to-day on the Monterey steamer, staying there overnight, thence by train on Sunday to Santa Cruz, and on Monday morning, they will train it to San Jose, reaching there in time to view the parade and races.

Messrs. Toepke, Spalding and Dave Marshall of the Bay City Wheelmen will hold a quiet run to San Jose on Sunday. The first man of the trio who scorches will forfeit a wine supper to the others.