In Allan N. Jones, San Jose and the Garden City Cyclers have another new rider like Delmas, of whom they can well be proud. Jones is the same age as Ziegler and Delmas, and weighs 159 pounds. His height is 5 feet and 9 inches. He commenced racing on the 4th of last July, so is almost unknown. Jones is still a Class A rider and will remain among the simon pures this year. Like Delmas, he won second in his novice race. It was on September 10th at San Jose, but in the half-mile handicap the same day he got away with first prize. In the half-mile race on October 1st, at Alameda, he won second but at the Thanksgiving Day meet of the San Jose Road Club, he was first in the half-mile scratch, and proved again that he was a dangerous man at a half mile. In the mile handicap that day Jones finished second, and these two races cover his whole racing experience. On the quadruplet Jones is the third man from the front and the other riders say that only the high gear keeps him from taking the pedals from them. For his short experience Jones may well feel proud to have ridden a mile in 1:34 1.5, though he divides the glory with the rest of the "quad" team. 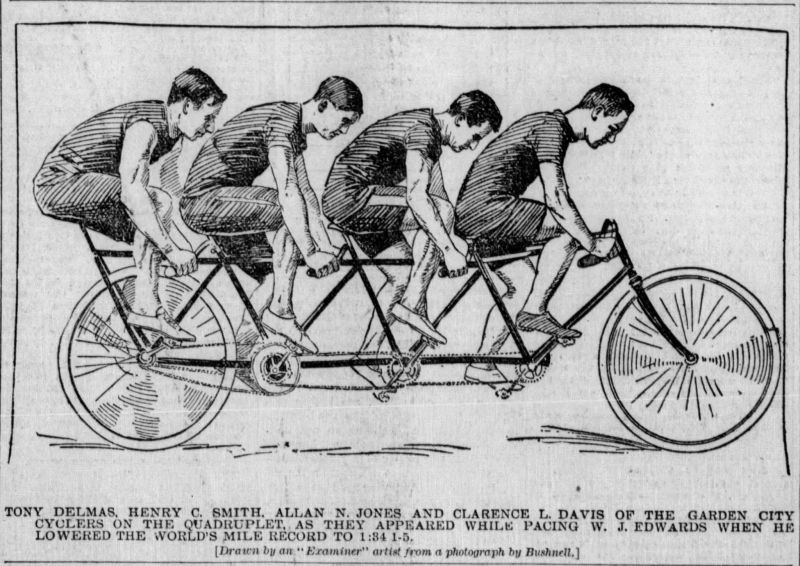 The end of the fourth relay saw the Olympics in first position. Allan Jones rode it for them and he and the Bay City man, McCrea of Los Angeles, rode together, exchanging pace up to the fifth mile, when McCrea's tire punctured. He said nothing, but kept on as best he could, though it was hard work. When Jones realized what had happened he lit out and soon left the Los Angeles flier behind. The latter rode on a mile nore when he met a rider on an old model wheel, heavy and cumbersome, with bell, brake, lamp and all the usual attachments of a tourist's mount. It was better than his own flat-tired wheel though, so he quickly dismounted and requested an exchange, which was readily granted, and he was off again at a good speed and made up all but a minute of the time he lost by his accident.

Had his trailer been near at hand, he being supposed to start a minute behind him, he would not have lost so much, but the trailer, George Dixon, also had a puncture and was nowhere in sight when McCrea most needed him.