CYCLING NEWS UP TO DATE.

WHAT THE CLUBS ARE DOING.

Kickers Object to Class A and B in the Amateur Ranks - San Francisco Clubs Well Represented at the Electric Light Tournament at San Jose - Lots of Wheelmen Off on Tours.

Walter F. Foster of this city, who divided the honors of Coast champion with Wilbur J. Edwards last season, is probably the best known racing man on the Coast. He was born in San Francisco about twenty-two years ago, and rode his first race on Washington's birthday, 1891. He won first place and time prize in this the twenty-five mile road race of the California Associated Cycling Clubs on the San Leandro triangle. It was in this race that Waller, who is now in Paris, first became famous, and by a technicality the time prize was taken from Foster and given to Waller.

WALTER F. FOSTER OF SAN FRANCISCO.
[From a photograph taken for the "Examiner."]

Foster began riding early in 1891, and during that year conducted a bicycle store in Alameda. In 1892 he went into active track work and took everything before him, being the Zimmerman of the Coast. It was in August of this year that he opened up the "Wheelery" at the Park, and partly gave up racing.

Last year Foster continued to win most of the races he took part in, but Otto Ziegler came on to the horizon like a little cloud that soon became so large as to overshadow Foster, who in July began to be spoken of as a "had-been," for there were Edwards and Davis, besides Ziegler, to divide the successes with, saying nothing of Fox, who had come up from the south and shown up strong. Last August Foster went East with Edwards to see the national races at Chicago and Springfield, and took part in some at the latter. This season Foster has shown, as the EXAMINER has said several times, that he was not a dead lion nor a back number. With good training at Stockton he has been able to defeat handily everybody but Ziegler and at the Fourth of July meet he did best Otto once.

Foster starts to-day for Denver, where he will at once begin training for the national championships which are to be held in the middle of August, and as he can ride faster than any of the Denver men and will have more time to get accustomed to the thin air there than the Eastern flyers, he ought to be able to do some good work, possibly taking some of the national championships. But, anyway, he will give a good account of himself and with his stable mates, Ziegler and Wells, ought to bring back the Coast's share of the prizes.

OTTO ZIEGLER JR. OF THE SAN JOSE ROAD CLUB.
[From a photograph for the "Examiner."]

Otto Ziegler Jr. of the San Jose Road Club is but nineteen years old, but yet has the best record of any racer the Coast has yet claimed. This doughty little Dutchman is a native of Detroit, Mich., but has spent most of his life in the Garden City. At present he is located here as a salesman. He began racing in 1892, but did not do anything till Decoration day last year when he won his novice race and the mile handicap the same day, then he went right up to the the top and staid [sic] there. During last season he took part in twenty-three races and won first in eighteen and second in the rest. This year he began on April 28th and won every race he rode in except the one at Stockton on the Fourth, when Foster bested him. Ziegler has repeatedly broken the five and ten mile-road record in road races, and at Stockton when he was sent for records he broke all records for which he tried. 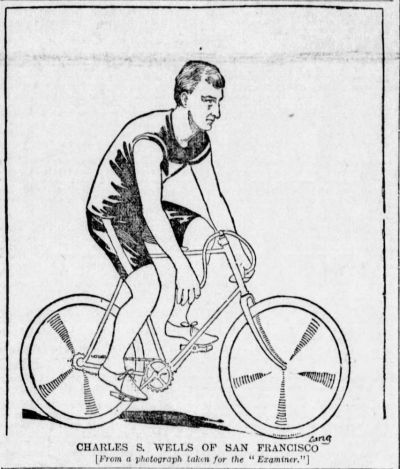 CHARLES S. WELLS OF SAN FRANCISCO.
[From a photograph taken for the "Examiner."]

Differing in all ways from Ziegler and Foster, Charles S. Wells is no mean competitor. As a stable mate of the former, it can well be said that these three will easily best any other trio on the coast. In fact there are but two other combinations in the country superior and they are made up of world beaters who have much better advantages.

Charley Wells is a native of Alameda county and older than his stable mates, but yet a comparatively new rider. He is one of the heaviest, if not the heaviest, cycle racers the world has yet seen, as he weighs over 190 stripped. Wells began racing while running a cycle store in Sacramento in 1892 with Dick Aylward of the Acmes, who is now his trainer.

It was in October, '92, and Charley took part in the Sacramento races. He rode in five events and got first position in three and second in two, thus proving his wonderful strength and staying powers. Tom Varney, the patron saint of coast racing, happened to be in the capital city that day and as Wells was working for him he was persuaded to stay over and see the bicycle races. Tom says: "That was my first racing enthusiasm and I was tickled, you may believe. I had before that thought that Wells was no good as a racer, but I very quickly changed my mind."

Wells has won his share of the races, and last year it was hard to tell who was the best among the first five, he being able to hold his own with Foster, Ziegler, Edwards and Davis. Wells seems best at the longer distances, as he cannot get off as fast as the others, but when he does get under motion with his high gear you cannot hold him. He has not the judgment of a Foster or a Ziegler, and so is not able to outgeneral his competitors on the track like the others, though he has a good sprint and a wonderful burst of speed at times. At Stockton he was sent for the hour record and did over twenty-two miles inside the hour.

Wells leaves this evening for Denver with his stable mates, Ziegler and Foster.

The wheelmen will have to give up training on the track at Central Park for some time, as a large segment has been taken up to make room for the tug-of-war contests.

One of the newest clubs in this city is the Columbia Bicycle Club, and it contains some good riders, too. It took part in the union run of last Sunday, but somehow none of the papers spoke of it.

Last night's electric light racing at San Jose was well accepted by the public, and the same idea might be carried out here once a week at Central Park with profit.

The next local event of interest will be the Olympic Club wheelmen's ten-mile road race on August 5th.

Zimmerman's brother-in-law has again gone abroad to see whether he cannot make "Art" keep steady and win all the races.

There are about as many class B riders in California as in all the rest of the country combined. Class A racing being the favorite in most parts of the East, B events are put on as features.

All the local clubmen are talking about going to Denver, and now that Foster and Wells are going their clubmates in the B. C. W. and O. C. W. are anxious to go.

San Francisco riders went down both by wheel and cars last night to the San Jose races. Griffith and Goddard of the Bay Citys made a quick run down on the Oakland side.

The Bay City Wheelmen are making great arrangements for their stereopticon entertainment and ball at Odd Fellows Hall August 6th. The exhibition of lantern slides will be interspersed with special features and songs.

The Californias will soon hold their annual road race. It may be over a new course.

There will be few club runs to-morrow, as it is an off Sunday.

George P. Wetmore was starter and L. A. W. Attorney Kerrigan one of the judges last night.

Dave Marshall and Eugene St. Germain of the B. C. W. are touring in Lake county, with headquarters at the Geysers.

Last Monday evening's meeting of the California Cycling Club was as well attended as usual, and a very interesting programme was carried out. Ex-Captain Scovern of the Olympics was present and made a short speech.

There are already over twenty entries for the Olympic road race. Many are already training for it, and it will excel all past road races of the O. C. W., which is now the largest bicycle club in the State.

Dan O'Callaghan of the B. C. W. is touring in Humboldt county.

The suit against the Midwinter Fair to obtain prizes in bicycle races that were won by local racers will come off on August 20.

All of the leading clubs here were represented last night in the electric light meet at San Jose.