The third annual 100-mile relay race of the California Associated Cycling Clubs, starting here, riding around the bay via San Jose ard finishing in Alameda, will be contested to-morrow by ten teams of ten men each from San Francisco, San Jose and Alameda County clubs. The start will be made promptly at 9 o'clock from in front of Varney's Biclorama, Market and Tenth streets, and the finish will be at Central avenue and Grand street, Alameda, probably a few minutes before 2 o'clock. Persons from this City wishing to see the finish should cross the bay not later than 12:30 o'clock on the broad-gauge boat, taking the train to Alameda and getting off at Grand-street station, from which point the finish is but two blocks distant.

The roads will be found somewhat heavy all along the relay course, particularly the first twenty miles out of this City; but the race would be run off if the roads were knee-deep in mud just the same, and at this time of the year they are not expected to be at their best. Last year a dry spell for two weeks prior to the race made the riding perfect and fast time was made, but it is not expected that last year's time of 4 hours 56 minutes 47 seconds will be equaled.

The teams and officials were all published in THE CALL yesterday. The relay committee of the associated clubs will have its headquarters in Alameda during the race, at the rooms of the Alameda Cyclers, near the finish, where reports will be constantly received of the progress of the race and displayed upon bulletins. It would naturally seem that this would be a great gathering-place for the wheelmen, but the fact is, so many of them will be actually employed in the race in some capacity on the ten different relays that there will be few at the finish. It will require between 700 and 1000 men to properly conduct this race - at least, seventy from each of the clubs, and as many more as they can supply - and as they will be spread out at all the different stations and will probably not get home until late tomorrow night it will remain for the citizens and unattached riders to see the finish and cheer the victor.

A great deal of money will change hands on the race - a fact which the association deplores, but which it is powerless to remedy. The Bay City Wheelmen are slight favorites in the betting, Olympic Club Wheelmen second, Acme Club Wheelmen third and Garden City Cyclers fourth. That is the order in which the sporting fraternity evidently think they will finish. There is considerable money up that the San Francisco Road Club will beat the Imperial Cycling Club, and on the face it looks like a good bet. There is no crowing beforehand among the clubs. They all realize that a hard race and the greatest wheeling event of the year is before them, and the riders are training carefully and waiting patiently for the hour of the race to come. All the riders, trailers and officials will be at their respective stations tonight - they must be - and the clubhouses here will consequently be deserted. 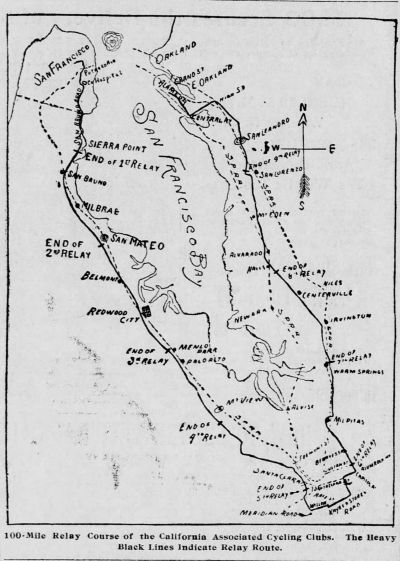 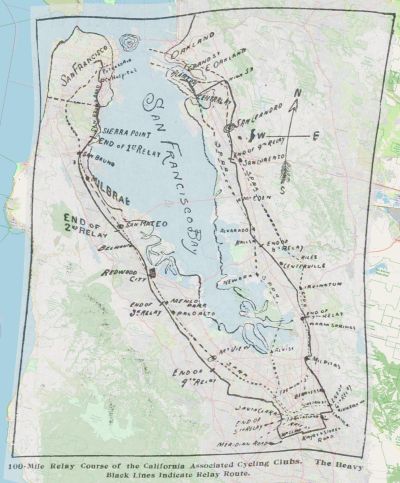 W. C. Brode of the Bay City Wheelmen has gone to his home in Los Angeles on a visit.

Arrangements have been made by the league officials with the Haywards Hotel, by which L. A. W. members will be furnished with Sunday lunches at 50 cents apiece upon showing their membership cards. The rate to all other wheelmen is 75 cents. This is the big hotel on the hill, and the officers consider that such encouragement from a hotel which has always stood aloof from making any reductions whatever should not only be fully appreciated by the league members, but should serve as a great inducement to others to join the organization.

Sanctions granted - Healdsburg Wheelmen, Healdsburg, May 7, 8; Citrus Wheelmen, Los Angeles, May 30; Citrus Wheelmen, Santa Monica, July 4.
Transferred to the professional class - L. V. Raymond, Coronado, at his own request.
Carroll E. Hughes, 56 Sherlock building, Portland. Or., is appointed representative of the National Racing Board in Oregon.
The National circuit of 1896 will be opened at Oakland, Cal., in connection with the Fabiola Fete, May 1. Following dates will be the Santa Rosa Carnival, May 2, San Jose Carnival, May 9. The week ending May 16 will be devoted to Southern California. From there the circuit will proceed to Denver, Colo., for May 23. Applications for other dates in California than as above must be made immediately.
Race-promoters may obtain the form of the regulation entry blank prescribed by the racing board on application to the undersigned or to any representative of the board.
Race-promoters are warned that compliance with the rule requiring programmes to show the description and value of the prizes for each event and the residence of each contestant will be rigidly exacted this season. Failure to comply therewith will result in suspension from sanction privileges.
The one mile championship of the North California division will be contested at the annual division meet, Petaluma, July 4.

The craze for collecting lapel buttons advertising certain makes of bicycles has increased to an alarming extent. During a cycle show at Syracuse, New York, recently 180,000 cycle buttons were given away in four days.

A physician says that the prevailing idea ihat a spin before breakfast is beneficial is a mistake. When taking a morning ride, if it be ever so short, do not neglect to first eat something. This is advice it will not be hard to follow.

Frank K. Lippitt, representative-at-large of the League of American Wheelmen at Petaluma, has issued a road book of Sonoma and Marin counties, which is a most valuable work for wheelmen and others using the roads in that section. It covers the territory completely, and is the result of a great deal of labor and careful measurements of distances. Used in connection with the league road book, a wheelman touring in or through these counties would have the best guide possible, together with information as to distances and the character of the roads to be traversed.

Manager Shafer is trying hard to match W. W. Hamilton, the Denver flier, against somebody for a professional race for a purse of $1000. He challenged John S. Johnson, after he was safe on his way to Europe; now he is after Walter C. Sanger, but the big Milwaukeean has refused, rightly saying that he is entirely out of condition, having been off the wheel all the winter, while Hamilton has been in constant training at Coronado. Shafer will now try for Bald or Zimmerman, It is good free advertising, this challenging men who are out of form, and no doubt Shafer has the best of the argument now. But if his Denver champion ever did run against Johnson, Sanger, Bald or Zimmerman, it would be all over but the shouting, for they are without question faster men chan he.

A new bicycle club has been formed, the name of which is comprised in the initials "G. G. C. C.," the meaning of which no one seems to know. The club is limited to fifteen members and the officers are: Mrs. F. Fitzgerald, president; Mrs. W. Rice, vice-president; Mrs. C. Lelong, secretary; Mrs. W. Leonard, treasurer and captain; Mrs. Dr. Edson, surgeon. The captain has called the first run for to-morrow to Centerville, taking the 7 o'clock boat, and upon reaching their destination they will enjoy one of those dinners which have made the Gregory House so popular among the wheelmen.

The Stearns team is still at Coronado waiting for favorable conditions to try for records. In a letter to the writer recently Manager Gleezen said:

Cold weather and heavy winds since the rain of a week ago have made it impossible to make any attempts for records, but it is now thought from the present indications that favorable weather will be had this week and trials for all classes of records up to one mile will be made. As we have but one pace-making machine, the sextuplet, all attempts will have to be made with the aid of this one machine, and while it is expected that we will be able to lower all of the existing records it will be the first time that records have been broken under circumstances like this for record-breaking teams have heretofore had at least three or four multiple machines such as triplets or quads, but from present indications the big six-seated "Yellow Fellow" will be able to carry the men fast enough, and such being the case the records will truly be remarkable ones.

The men are all in excellent condition and are riding very fast, and as there are only four more weeks remaining in which records can be made there will surely have to be a lot of lively work done to get them. Yours,

The Junior O. U. A. M. Cyclers will have a run to-morrow to Haywards under Captain Luce, taking the 9 A. M. broad-gauge boat.

Charles M. Murphy, the five-mile champion of last year, is negotiating with Hoyt, the playwright, to have a bicycle comedy written for him with “Brother Charles" cast in the leading part.

Smoking while indulging in the pastime of wheeling is a practice to be avoided. It not only injures the wind, but is directly responsible for various kinds of lung disease. Physicians have argued that the wheel is injurious - physicians who do not ride - but let them examine other features of cycling and they will quickly come to the conclusion that it is not the exertion dependent upon propelling a wheel, but the dissipations of smoking and drinking practiced by the riders that are dangerous to health.

The board of officers of the North California division, League of American Wheelmen, will meet Saturday evening, April 25, at the rooms of the Reliance Club Wheelmen, Oakland.

The bicycle races at the Fabiola Floral Fete, to be held on Mayday at the Oakland Trotting Park, will be a big feature of the day's programme. Prizes amounting to $600 will be awarded for races and special events. A lantern parade will be held in Oakland April 29 or 30, and valuable trophies will be given to the club making the best appearance and the visiting club having the largest number in line. The track will be placed in fine condition at the Trotting Park, and as new grand stands are being erected there will be ample provision for the large attendance expected. The committee in charge of the bicycle events of the fete consists of George F. Neece (chairman), Acme Club; W. E. Griffith, captain Reliance Club Wheelmen, and A. P. Swain, captain Acme Club Wheelmen. The National racing circuit will open at this fete, going to Santa Rosa on May 2. It will attract some of the fastest men in the world, who will follow the circuit all over the country.

E. C. Bald has been suspended by the National racing board on the ground of having disposed of one of his prizes while a member of the class B division. Bald will have no difficulty over this. There is little doubt that he violated a clause of the racing rules, but inasmuch as he intended to desert the amateur ranks for professionalism it might seem that the racing board was a trifle hasty. However, Chairman Gideon is careful in his administration of the rules, and it was perfectly right to suspend the champion pending investigation.

The Alameda Cyclers will hold their annual election next Monday night, and considerable of a contest is expected for all the positions except the captaincy, which is conceded to the incumbent, V. A. Dodd, without question, as his command during the past year has been particularly satisfactory and efficient.