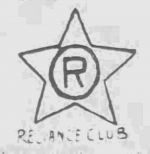 In the early days of cycling the Oakland Bicycle Club was a large and enthusiastic organization, but when the revolution in favor of the bicycle made of it a vehicle of recognized utility, and the mere fact of riding such a vehicle was no longer a sufficient bond of unity to hold men in association, the club declined, and repeated efforts failed to maintain a purely bicycle club in Oakland despite the level and well-paved streets of that city and its environment of well-kept roads. But the cycling sections of the Acme and Reliance Athletic clubs of Oakland are now active and enthusiastic bodies and have been potent factors in the growth and development of their respective clubs.

The treasurer's report, which has just come from print, shows that the total indebtedness of the Reliance Club is $5,832.37. The sum of $2500 is due the bank and is secured by the individual indorsement of the members of the board of directors.

Last Tuesday evening the Reliance Club Wheelmen of Oakland held their annual election, which resulted as follows: President, E. B. Jerome; Captain, Charles Bates; Secretary, Phil Carlton; First Lieutenant, J. H. Dieckman; Second-Lieutenant, Fred Knight; Bugler, H. P. Carlton. This places the racing men in charge of the wheeling part of the Reliance A. C., and as the officers are young men full of life, the club will be more active this year than ever in cycling matters.

Captain Bates will have charge of the Reliance relay team and already has half his men picked out.

"Who are, who are

We are, we are

After the feed the boys took a special train at the foot of the mountain and enjoyed the scenic ride up Tamalpais' bald side. As the train sped along over the high trestles and around the sharp curves of the serpentine road, the bikers made merry with songs and cheers.

Gradually the panorama appeared to the view. The bay, ocean and all the surrounding cities were spread out thousands of feet below, in striking contrast to the gray spire of the mountain. When the little train reached the top, an elevation of 2,600 feet, the Reliance cheer rang out lustily and the club's emblem was placed on the highest rock.

The Reliance Club Wheelmen have elected the following officers in the places of those who recently resigned: A. Baxter, captain; A. P. Deacon, first lieutenant; Charles Lefevre. second lieutenant; Frank Buckley, captain.