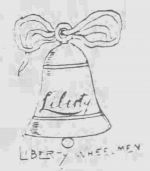 "Our colors are white and gold, and the emblem the gold liberty bell suspended to a white lover's knot." 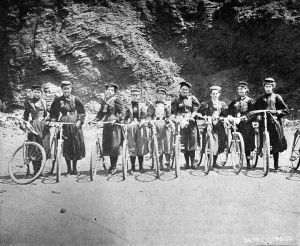 The Liberty Cycling Club is about to form a ladies' annex. The club will have a theater party to the Tivoli next Monday evening, and a hop at the clubrooms July 25. C. Meyer, O. St. Denis, C. Armbruster, N. A. Robinson and W. E. Bouton have charge of the latter function. The club will hold a run to Crystal Springs tomorrow, which is a very pretty ride.

The Liberty Cycling Club has a run out through the Oakland foothills to-morrow, the following week they will ride to Bolinas and in the middle of August will escort the members of the Ladies' Annex through the Park. The club is steadily gaining in numbers and gives promise of becoming a power in cycling.

CYCLING NEWS TO DATE. - Club Runs and Private Excursions to Different Points Outside the City. - The San Francisco Examiner, 27 Jul 1895

Last Monday night the Liberty Cycling Club [photo is of their "ladies' annex" M.F.] held a theater party at the Tivoli. Nearly all the members attended and greatly enjoyed the evening. Thursday evening the club held a dance at Mission Turn-Verein Hall, which was well attended and very enjoyable. Norval A. Robinson acted as floor manager, and dancing was indulged in until midnight. The club members rightly believe in enjoying social as well as cycling pleasures during the week, and will have these hops regularly hereafter. To-morrow a run will be held to the Oakland foothills, leaving on the 9 a. m. creek-route boat. On August 4 the members will ride to Bolinas. The ladies' annex to the club is growing rapidly, and under the guidance of Mrs. Robinson promises to become quite a factor before long.

Twelve enthusiastic young lady wheelers met last Thursday night at the home of Mrs. N. A. Robinson, 1141 Market street, for the purpose of forming a bloomer club. The following officers were elected: Miss L. M. Munson, president; Miss Ida M. Stanford, secretary-treasurer; Mrs. N. A. Robinson, captain. The club was organized as an annex to the Liberty Club, and will be known as the Ladies' Annex to the Liberty Cycling Club. 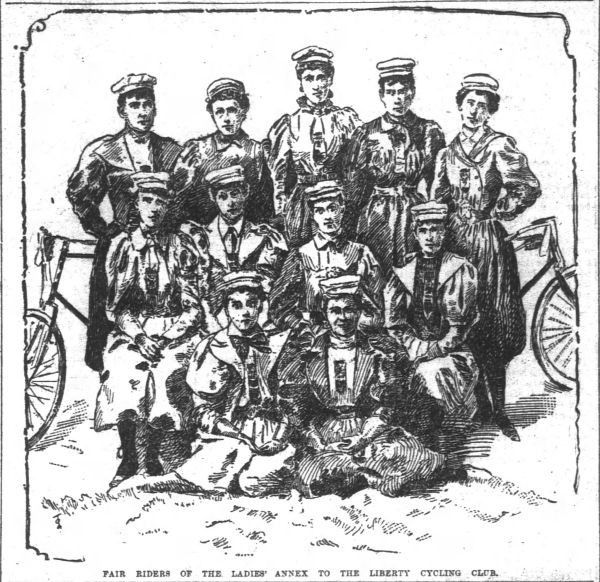 The Ladies' Annex to the Liberty Cycling Club will have a run to Crystal Springs to-morrow, leaving the corner of Twenty-fourth and Howard streets at 7 A. M. It will be a picnic, and members are expected to bring their own luncheon, remembering that long country rides are forerunners to large appetites.