There has been nothing of particular moment during the past week, except the arrival of the McIlraths from Chicago last Monday on their tour awheel around the world. They have been shown every attention since their arrival, and will no doubt enjoy themselves here up to August 13, when they embark for Japan.

The regular bimonthly meeting of the board of governors of the California Associated Cycling Clubs will be held this evening at the rooms of the Bay City Wheelmen, 441 Golden Gate avenue, and all delegates are requested to be present. An amendment to the by-laws will be offered, which must pass the meeting unanimously to become a rule, that no contestant can ride in the relay race for any club unless he has been a resident of the locality in which the club is situated for at least six months prior to the race. Although one negative would kill this resolution, it will probably be passed, as it is favored by all the clubs. The proposition to hold a theater party for the benefit of the association, also a steamer ride around the bay and the annual ten-mile race in October, will be thoroughly discussed. The question whether the Royal or Crescent club is entitled to membership under the original application of the Crescent Road Club, will be finally reported on by the inter-club relations committee. There is a rumor, which sadly needs verification, that the association will hold its next meeting after to-night in San Jose.

The Pacific Cycling Club will ride to Los Gatos by moonlight to-night, returning via Congress Springs to-morrow. The roads covered on this trip are in splendid condition.

The Camera Club cyclists held a meeting last Thursday evening. Captain Argenti reported on the recent club runs and President Adams interested the members with several readings on cycling from papers written by himself. The club will meet again on the 15th inst. 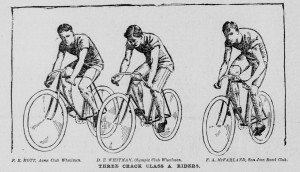 Harlow H. White, chairman of the Olympic Club Wheelmen, with four companions will leave next week for an extended vacation in the northern part of Humboldt County on a hunting and fishing trip. Cycling clubs continue to be organized everywhere. The latest is the Polytechnic High School Cycling Club, with the following officers: President, W. Britt; vice-president and second lieutenant, S. Phillips; secretary, treasurer and first lieutenant, L. White; captain, N. Cahn. Several country runs are planned and the club promises well.

The Outing Road Club will enjoy a run to Camp Taylor to-morrow, taking the 8 a. m. Sausalito boat.

Captain L. L. Korn has called a run of the San Francisco Road Club to the beach to-morrow, leaving the clubhouse, 726 Golden Gate avenue, at 1 p. m. The blind run last Sunday ended at the Ingleside, the Outing Road Club being the guests of the San Franciscos. An excellent repast was served and every one had a jolly time.

The California Cycling Club, members will go to Napa to-night, leaving the City on the steamer Zinfandel from Jackson street wharf at 6:15 o'clock sharp. They will enjoy a run in the vicinity of Napa Sunday and return that night. For those who cannot get away on this trip another run has been called to the park for to-morrow, leaving the clubrooms, Twenty second and Folsom streets, at 9 a. m. The club will go to Redwood City, have a scorch over the five-mile course, and return via the big lakes on Sunday, August 11. All this has been arranged by their energetic captain, Mr. Burke.

The San Jose Road Club will hold the eighth of a series of five-mile handicap road races over the East San Jose course to-morrow, the entries for which are as follows: J. Wing, J. A. Harrington, F. Smith, F. A. McFarland, R. D. McFarland, V. A. Benson, G. Hardenbrook, J. Carroll, A. L. Benson, C. Dahlstrom, Ray Hogg, H. Galloway, Charles Maddox and Gus Navlet. They will have handicaps ranging from nothing to 3 minutes, with McFarland on the scratch. The record for the course is 13:43 2-5. held by McFarland, and he will try to lower it considerably. After the race the club will entertain the Acme Club Wheelmen of Oakland, who will ride down to-night on the Oakland side under Captain Kitchen. The Road Club will meet them at Warm Springs.

The Oakland Y. M. C. A. Cycling Club will hold a five-mile road race on next Thursday evening at 6:30 o'clock, from San Leandro to Haywards. B. H. Elford and E. C. Brown are looked to to make the best time.

The San Francisco Bicycle Track Association will meet next Friday evening at the rooms of the Young Men's Christian Association. There is still some talk of the association holding a race meet at Central Park, to increase its treasury if possible. The meet could be held on a Saturday afternoon and would probably be successful.

The Four Aces Cycling Club will have a run to San Leandro to-morrow, leaving their clubrooms, Eighth and Mission streets, at 10:30 a. m. sharp.

The Golden City Wheelmen will have a run to Tocaloma to-morrow, leaving on the 8 a. m. Sausalito ferry, thence by train to San Anselmo, where the ride will begin. Ten new members have been added to the roll and several more applications are to be voted on.

The Reliance Club Wheelmen of Oakland will hold a club run to the beach and Presidio to-morrow. The club will hold a five-mile handicap road race from San Leandro to Haywards on Sunday, August 18, and Captain Bates expects a large entry list.

The Olympic Club Wheelmen have a five-mile handicap road race scheduled for Sunday, August 18. Ten valuable prizes will be offered, and as Foster, Jones and Davis will ride the pace will be very fast. Foster will endeavor to ride within the world's five-mile record of 11:19. He will undoubtedly lower Alexander's coast five-mile record of 12:03 2-5, but whether he can lower the former mark is a question. However, with good pacing and a fast course he should be able to do the trick.

This Edwards is no relation to the Olympic flier, except in rapidly developing speed. He won by six inches from Gooch, who was rapidly coming up.

There was little wind, and the race passed off very successfully, there being a large crowd of spectators. The officials were: N. H. Jacobs, referee; A. T. Brock, starter; timers — C. N. Wood, A. Bedbury, Charles E. Hanatt.

HE IS AN ENTHUSIAST.

Henry Martin, capitalist and worthy grand treasurer of the Native Sons of the Golden West, is now an enthusiastic bicycle-rider. He started in with the idea that the exercise would reduce his weight. He was not disappointed, as he has lost twenty-two pounds avoirdupois in about three weeks. The success of the experiment has given him a liking for the exercise and the "bike" is now one of Mr. Martin's most cherished possessions. 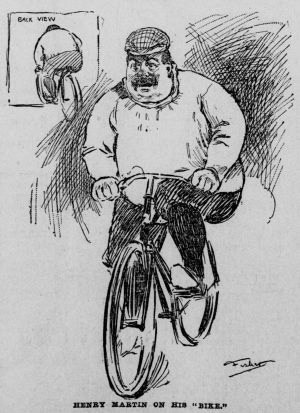 HENRY MARTIN ON HIS "BIKE."

His favorite exercise ground is Washington square and there is not a night in the week but what "the most popular man in the order of Native Sons" can be seen at exercise. When he first started in Henry tipped the beam at 300 pounds. Now he only weighs 278 pounds and has a complexion like a healthy schoolboy. The youths of the neighborhood have tried and tried again to beat him in trial spins around the square, but in a spurt he can win hands down. Over a distance he is not so good, as his weight tells. When Mr. Martin made the pleasing discovery that he could control a "bike" he at once procured a complete outfit. His bloomers and sweater are of the latest pattern and his cap is of Scotch plaid. When in full uniform he presents a striking appearance and his friends compliment him. Every Sunday Mr. Martin goes to Oakland and takes a ten-mile spin. As soon as Deputy Collector Jerome has recovered from the effects of his last accident, Mr. Jerome intends to challenge him to a contest on the Oakland racetrack. In spite of the acknowledged ability of the Customhouse man as a bicycle-rider there are many who are willing to bet that Martin will win out in the end.