Over a Hundred Riders in the Lists.

The Day's Festivities Begin With a Grand Street Parade.

If the weather clerk does the right thing by the wheelmen and issues forth a clear and sunny day for the race meeting at the Midwinter Exposition to-day, those who attend will witness the greatest day's sport ever given by the cyclists on the Pacific Coast.

Never before was such an aggregation of evenly matched and celebrated riders brought together for one meeting. In one race alone there are thirty-two entries, and it is safe to say that very few of these will fail to face the starter. The task of handicapping such men as these has been a long and laborious one. Nearly all of them have records, and the advantages to be obtained in the handicaps, should a mistake be made, would result in marring the event. It is predicted by experts that the mile-handicap race, which is on to-day's card, will be one of the most exciting contests ever seen in San Francisco. 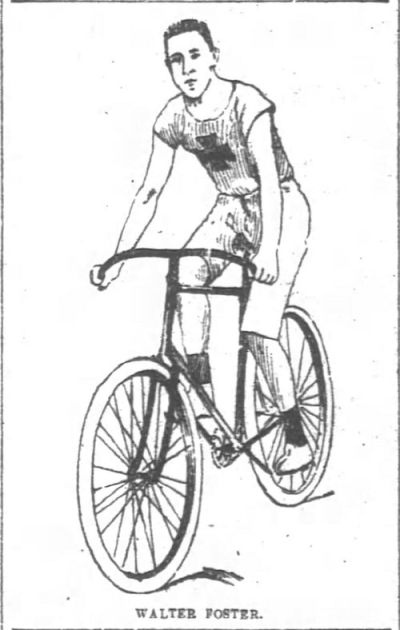 With 125 men entered in the races and all of the very best caliber and in the best attainable shape, it will be a matter of wonderment if the quarter, mile and two-mile records are not reduced, and reduced very materially at that. The racers are all in town, and from no quarter comes any intimation of lack of conditions or loss of enthusiasm and eagerness for the fray. The San Jose men, who were coached and trained by Gugel, are probably in better shape than at any time heretofore. They are bubbling over with confidence and openly declare that to-day shall be a red-letter day for the Garden Citys. But the local men and those from other parts of the State have not been behind at all, and are quite positive that they will lose none of their laurels.

Some mistaken idea has been abroad about the prizes appropriated for the races, and the management of the Exposition, in order to show their good will in the matter and to make everyone easy, have given to Chairman Wetmore the orders, on the different stores of the city for the prizes which have been selected, and which will be presented to the winners immediately after the races. This is a good move, and not only assures the racers of the prompt delivery of the prizes, but indicates also the disposition of the management to make the races the success which they certainly will be. 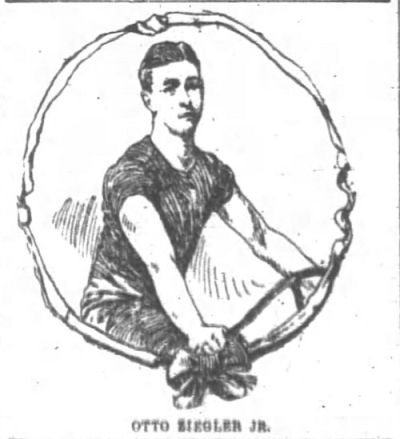 At no time in the history of cycling on the Coast has there been such a great number of meetings in prospect as at the present time. The meeting of today will be followed next Saturday by the field day of the Olympic Club, on which occasion four bicycle races will be run. This is followed at San Jose by the meet of the Garden City Cyclers on May 11th. Then again it returns to San Francisco. The Midwinter Exposition on May 19th will hold another race meet, followed a week later, on the 26th, by what will be the greatest gathering of wheelmen ever brought together in California. It will be the annual meeting of the California Division League of American Wheelmen and not only will the races be of general interest, but the general entertainment at the Fairgrounds and in the city will be something which has never been undertaken before by the wheelmen of California. The meet of the 26th is followed on the 30th of May by a meet of the Bay City Wheelmen at Central Park. The Bay City Wheelmen are the oldest hands in the business of race promoting, and that their meet will be an unqualified success goes without saying. 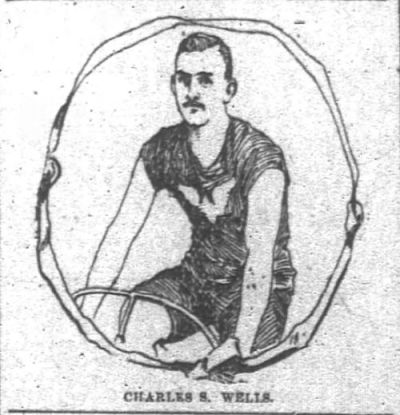 The parade of wheelmen starts to-day from the Palace Hotel at 1 o'clock sharp. The captains of the various clubs have called runs, and no doubt a big tournament will take place. The line will start from the New Montgomery-street entrance, and will follow out Market street, Golden Gate avenue, Divisadero and Page streets to the panhandle. Bliss and Dirnberger of Chicago arrived in the city a few days since, and will be at the races to-day.

The local riders are all in fine fettle, and make no secret of their intentions to keep as many trophies at home as possible. C. S. Wells, the two Terrills, T. A. Griffith and Tom Hall of the Bay Citys are in particularly good trim and constitute a formidable contingent. Considerable is expected of Wells. He is no green hand st the business by any means, and is a dangerous competitor in any sort of a race. Next to Zeigler of San Jose he won most of the prizes contested for last year, and is still after medals and glory.

Bob Terrill is a newer hand at the game than is Harry, but that does not mean that he is a second-rater. His greatest achievement on the wheel was the tremendous pace he set in the first ten miles of the recent 100-mile relay race. He had a rough and hilly road, but covered it in 30:00.

Griffith, the speedy rider, who broke the world's record for his ten miles in the relay, covering the distance in 26:14, promises to make things hum in the mile handicap and two-mile race.

Tom Hall is another of the Bay City cracks of whom much is expected, and so is "Handsome Bob" Long. The latter is noted for his spurting abilities. He is entered for the quarter, mile and two-mile events.

Walter Foster, the Olympic Club's pride, is entered in all of to-day's races and is counted on by his friends as being a sure winner in at least two of them.

Haley, the Olympic's novice, has been doing some splendid work in his training and is looked upon as having more than an even show of capturing the first prize in that event.

Otto Zeigler, the San Jose wonder, has been in town several days putting on the finishing touches to his training. He looks to be in splendid condition and is bubbling over with confidence. Zeigler is considered a veritable prodigy by many cycling experts. He is only 18 years old, but works like a veteran. Zeigler made a fine record last year, winning twenty-three prizes out of twenty-five races in which he participated. Eighteen of these were first prizes.

Lovers of close and exciting finishes will regret to learn that Davis of the Garden City racers will be unable to take part in to-day's events. He met with an accident recently which will keep him on crutches for a fortnight.

Alexander, another of the San Jose cracks, will be on hand and will put in a strong bid for the medals.

Wilbur Edwards, the San Jose record-breaker, is here and ready for the fray.

Fox, the Los Angeles crack, has been doing some tall training of late at San Jose and is expected to loom up in the front line with the best men entered for the races. Fox belongs in the same class ag Zeigler, Edwards, Foster, Wells, the Terrills and the other first-class riders and is liable to give them considerable trouble.