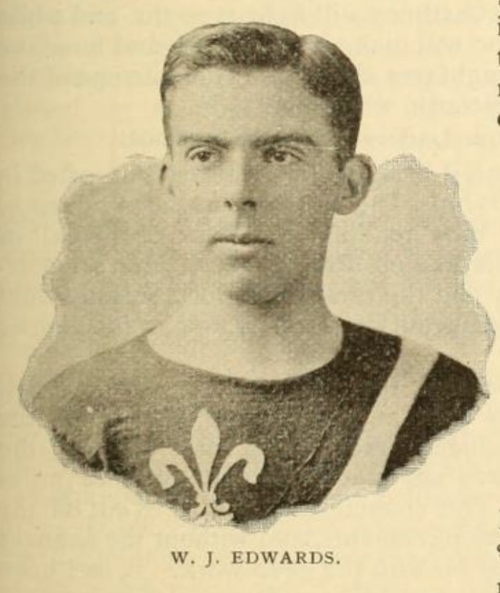 Wilber J. Edwards, the star rider of the Garden City cyclers, is pretty well known all over the Coast, but as yet no full history of his racing work has ever been printed. His first race was in 1890 at the field day of the University of the Pacific at San Jose. He won that race and in 1891 he won the race again. In 1892 Edwards got second in the mile State championship, riding against such mon ag Foster, Bell, Waller and Needham, who were crackerjacks at that time. This was on the old Alameda track, and Grant Bell finished in first position.

On Admission Day, 1892, at the Garden City, Wilber Edwards got first in the mile open and won first place twice in the five-mile open, it having been run over on account of the time limit. At another meet at San Jose that year - November 28th - he won the five-mile scratch and also got the half-mile championship.

With 1893 Edwards became the foremost rider on this side of the Rockies, and after falling in the final of a two-mile championship he immediately started in another race and broke the then Coast mile record, doing a mile in 2:28 2-5. At the intercollegiate championships at Stanford University that summer the pride of the Garden City Cyclers captured the two-mile bicycle race.

Edwards' most meritorious work for 1893 was lowering the Coast record for the mile to 2:15. This was in competition at Sacramento, and still stands for competition. On December 12th of the same year he tried for the eighths of a mile standing start record against time, at the Alameda track, and easily made 16 3-5, which was a world's record for that time.

The past year was a poor one for Wilber Edwards. Several falls while training and a lack of a thorough course of training had considerable to do with it. He went East and rode in the National circuit, but had no luck, and after the Denver meet returned home. He saw his local rival, Otto Ziegler Jr., go up to the top and become the American champion, but 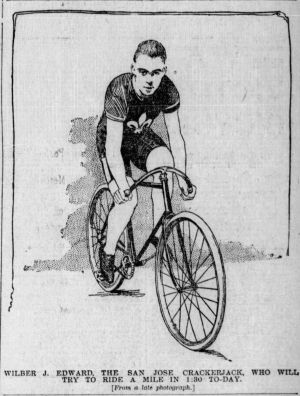 WILBER J. EDWARD, THE SAN JOSE CRACKERJACK, WHO WILL TRY TO RIDE A MILE IN 1:30 TO-DAY.
[From a late photograph.]

yet derived some pleasure from it in seeing all the Eastern men defeated by Ziegler at Denver after they had joked him for weeks about California riders not being able to ride fast enough to keep warm. Later in the year, when he won first from Ziegler in the twenty-five mile race at Los Angeles, his friends began to think he would be up to his old form again.

At Sacramento, while the Rambler team was going for records, Edwards tied the world's quarter-mile record, and a few days later at San Jose he rode a mile inside of two minutes, paced by tandems and horses.

Whether Wilber J. Edwards is as speedy as Otto Ziegler, the amateur champion, is a much mooted question. Ziegler rode a mile in 1:50, with poor pacing on a mile horsetrack at Sacramento, where the wind was against him part of the way. With better pacing he could have done seconds better. To-day Edwards will try to make a mile, flying start, on a straightaway course at Livermore, paced by four good men on a quadruplet. There is a little down grade and wind in favor of the rider, and this kind of a ride was done at Buffalo over a better course by John S. Johnson in 1:35 2-5 and later over a similar course paced by a "quad" by Eddie Leonart of the Buffalo Press Cycle Club in 1:35. Richard P. Aylward, who trained Ziegler last year and who is training Edwards and his pacemakers, is confident that Edwards can do it in 1:30 or better.

Edwards will have good training and the best of wheels to ride this year, and will probably go East in the fall for the great Springfield meet, and we shall see what he can do. He may show up as well as Ziegler did last year. Let us hope so.

CYCLING NEWS AND COMMENTS - Wilber J. Edwards, the San Jose Crackerjack, and Something of His Racing Record - The San Francisco Examiner, 09 Feb 1895

Last of all, but by no means least interesting, was the five-mile safety scratch race. The starters were: Osen. Edwards, Bell and Schleuter, the latter making the pace, and a snail-like pace at that, for about four miles. The others were riding in a bunch at their ease. On the fifth mile they all limbered up a bit, and when the last half-mile was begun Bell made one of his phenomenal spurts, quickly moving up from last place to the front. But he made his final effort a little too soon. Big George Osen didn't want to follow anybody's procession, so he just shook a few flies off his broad shoulders and began to pedal as though he had a license to do nothing else. Then Edwards of Palo Alto breathed a prayer to his alma mater and moved up as though he wished to whisper a word in Osen's ear. Both passed Bell, and Osen may consider himself lucky that he got to the finish before Edwards was quite close enough to reveal his secret, otherwise he might have reflected less glory on the Garden City cyclers. The time was 16:32 2-5, not fast, but, as Captain Ravlin said, it was enough glory for San Jose to win the two chief events of the day without minding a few seconds more or less. Nevertheless, Walter Foster is happy, for he still holds the time championship for the Pacific Coast. 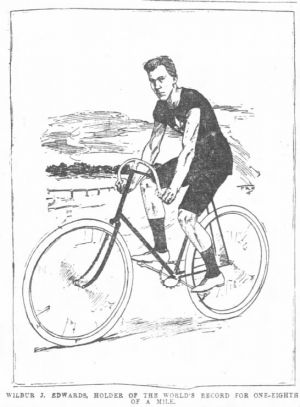 WILBUR J. EDWARDS, HOLDER OF THE WORLD'S RECORD FOR ONE-EIGHTH OF A MILE. 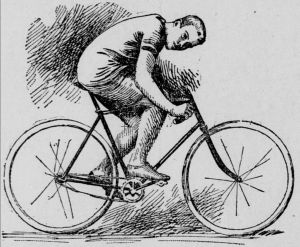 Wilbur Edwards, of the Garden City Cyclers, is one of the crack riders of the Coast, and although he is always close to the top, has never been able to hold a Coast record. When in condition he is able to hold his own against either Foster or Fox, for any distance up to five miles. 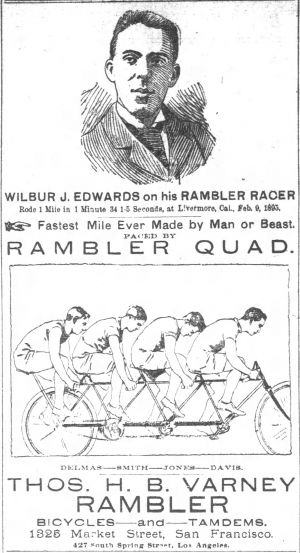