Result of the Five-Mile Handicap Road Race at San Jose.

THE TIME WAS RATHER SLOW.

Programme of the Garden City Cyclers During the Admission Day Festivities - Meeting of the Board of officers of the North California Division of the L. A. W. - A Message to Ziegler.

SAN JOSE, August 19. - The five-mile handicap road race, under the auspices of the San Jose Road Club, came off to-day. The start was made at the corner of Alum Rock and McLaughlin avenues, and the finish was made at a point on McLaughlin avenue about 300 yards from the starting point. It was expected that the Coast record for the distance, 13:57, held by Otto Ziegler, would be broken, as Floyd McFarland and Ted Belloli, the two scratch men, have been in training for some time in preparation for the event.

The conditions were not entirely favorable for record-breaking time, however, and the best time was made by Ted Belloli - 14:02 2-5.

McFarland did not finish, as he realized that the pace was too slow, and dropped out 100 yards from the finish. R. P. Nash also dropped out early in the race.

C. J. Belloli and A. Berryessa received falls, and the former injured his knee, but not seriously.

V. A. Benson, who received a start of 1:30, was first over the tape, winning the prize, a silver cup. His time was 15:12. The cup becomes the personal property of the winner of three successive races.

The crowd that gathered at the starting point at 10 o'clock numbered 200, mostly cycling enthusiasts.

THE START AND FINISH.

The start was made at the crack of a pistol and the men got away in good shape without a hitch. The route was out Alum Rock avenue to the Story road, thence to King's road, thence to the McKee road and back to McLaughlin avenue. The racers struck a stretch of gravelly road and this was what caused the slow time and is also responsible for the falls of Belloli and Berryessa. The men finished in the following order: 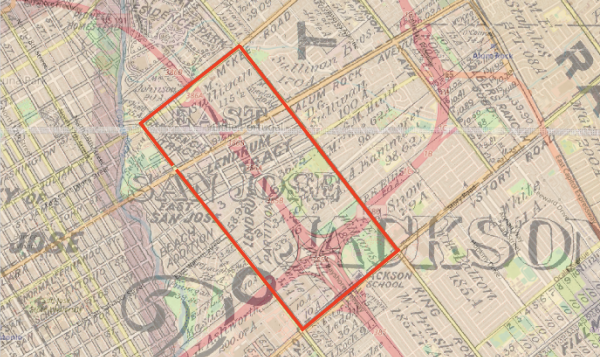 This afternoon there was a club run to Santa Clara. The road races, originally inaugurated by the San Jose Road Club, are growing in popularity and are becoming more and more frequent. The idea is also meeting with favor among other clubs on the road, and there is talk of holding a big meet this fall. The San Jose Road Club will hold its next road race September 9th.

The programme of the Garden City Cyclers during the Admission Day festivities is as follows:

September 10th - Grand parade of the C. A. C. C., in conjunction with the Native Sons. Prizes for the best appearing club, and prizes for first and second clubs having best attendance; evening, garden party in honor of visiting cyclists is given by the Ladies' Cycling Club.

The Acme, Bay City and Olympic clubs will be present during the festivities. The events arranged for the racing of September 10th by the Garden City Club have been amended and are now as follows:

The board of officers of the North Division of the L. A. W. had a meeting in this city last night. Vice-Consul H. A. Alexander of San Jose presided in the absence of Chief Consul L. W. Ripley. Others present were Secretary-Treasurer W. H. Toepke of San Francisco, Representatives Welch, Kerrigan and Smyth of San Francisco, Desmond and Belloli of San Jose. It was decided that the expenses of the pending suit of Wells and Terrill against the Midwinter Fair people will be borne by the division. The resignation of Chief Consul Ripley was received and laid on the table. It was decided that hereafter division championships shall be open to Class A and B riders. A congratulatory telegram was sent to Otto Ziegler at Denver. The Pacific Cyclist was made the official organ of the division.

C. N. Ravlin has resigned as Secretary of the Racing Committee of the Garden City Cyclers and C. L. Dans has been appointed to succeed him.

Wilbur Edwards is expected in about a week. On account of his accident at Asbury Park, in which he broke a ligament in his leg, he was unable to attempt anything beyond acting as pacemaker at Denver. He will rest during the balance of the season.