A Wheelman's Journey Through Four Counties.

Announcement of Races by the Alameda Club. - A Run to Mill Valley - The San Jose Track. 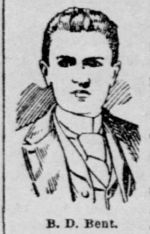 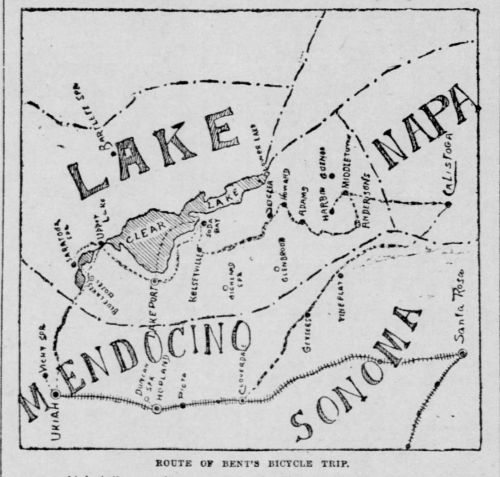 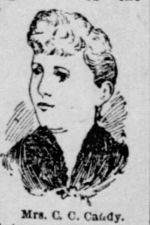 Mrs. C. C. Candy, wife of the chief of the western division racing board of the L. A. W., is the first woman to make the descent of Pike's Peak on a bicycle. Accompanied by her husband, she left the summit at 1:15 P. M. on Saturday, July 16, and in 4 hours and 15 minutes had reached the foot of the mountain. The only accident occurred when they were about four miles from the summit. Mrs. Candy was ahead, and her wheel suddenly slipped, throwing her off to one side of the road. At this point, which is above timber line, there are no trees or shrubs to stop a person when once started to rolling, and the descent is quite rapid for fully 500 feet. The side of the mountain is very rough with boulders, and one of these was directly in the line of her descent. After rolling about 100 feet she came to an abrupt stop against the rock.

The Alameda Bicycle and Athletic Club has finally decided on the date of its next racing meet. It will be held on September 5th, in recognition of Labor day, the recently declared legal holiday. The races will nearly all be for short distances, thus insuring many entries and preventing the sport from becoming tedious. An innovation sure to be appreciated is the manner in which the prizes will be distributed. They will all be on exhibition before the day of the contests, and immediately after each race the winner will be presented with the trophy to which he is entitled. The list of events will be as follows: Half-mile safety novice, quarter-mile safety scratch, halfmile safety handicap, one-mile safety handicap, two-mile safety handicap, quarter-mile running race, open. Slight modifications may be made, but accurate entry cards will soon be ready. All of the best men in this part of the State will probably compete with the possible exception of Walter Foster, who now thinks of entering in the Admission day races at Riverside. By the way, Foster has just received a new wheel with which he hopes to still further reduce the coast record. It is a Model D Victor racer weighing only 25 pounds, all on.

The "smoker" given by the Alameda Bicycle and Athletic Club on Saturday evening was largely attended and thoroughly enjoyed by all present. Speeches were made by prominent members of other clubs, congratulating the Alameda boys on their successful efforts to stimulate interest in cycling on the coast. The club presented Frank Waller with a gold watch in recognition of the fact that he reduced the world's 24-hour record on the Alameda track. After disposing of a substantial repast, spread in the pavilion, and discussing cycling affairs until a late lour, the guests dispersed with three cheers for their generous guests.

Secretary Smith of the Garden City Cyclers reports that everything will be in readiness for their big racing meet on September 9. The new track has been laid out and the corners banked. The top dressing of pulverized blue rock will be laid on this week, and the course will be in condition for training purposes by August 20. It is expected to be fast, as it is being built on approved lines.

The Bay City Wheelmen went on a run to Mill Valley yesterday. There was a large turnout, and nothing occurred to mar the pleasure of the occasion. The initiation fee of this popular organization has been reduced to $5.

The California Cycling Club had a great time at Alameda yesterday "trying out" its racing men. There were some lively spurts, and the time of all the fast ones was taken for future reference. Several members of the Pacific Road Club also tested their speed on the track. Captain Hancock is developing rapidly aud bids fair to come to the front should he enter in the September races.

The Pacific Road Club is making arrangements for a series of road races for a medal which will have to be won three times by the same person to become private property.

And now the Acmes of Oakland are talking of building a track. The more the merrier.

It is time to say a word against the cramped position on the wheel assumed by too many riders, who apparently wish to be considered "scorchers.” It is neither graceful nor healthy to double up like a half-closed jack-knife. Besides prejudicing people of sense against cycling as a beneficial exercise, this attitude is not calculated to inspire any spectator with the idea that the rider is on pleasure bent.

Of course the event of the week was the lowering of the world's record to 2:11 by G. F. Taylor of the Manhattan Athletic Club. As this wonderful time was made from a standing start, it must be considered as equal to 2:07 had the rider passed the starter going at full speed, as a trotting horse always does. Hence it is safe to assert that the bicycle is capable of greater speed than even Sunol or Maud S.

The Alameda club has a mascot. It came from Japan, proudly wears the Nile green and pink, and is known as Little Ah There!

The San Francisco club had no regular run yesterday, but many of the members took trips into the country. It is rumored that Secretary Cobden was seen on the road to Coventry Cross. Captain Pixley at last accounts was pushing his pneumatic up Mount Shasta. When he reaches the snow line he will turn around and coast into Oakland.