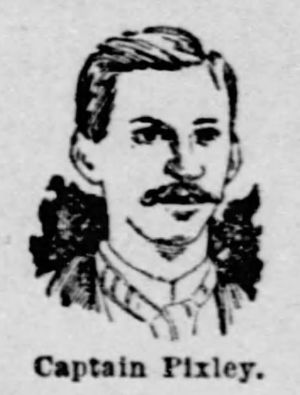 The San Francisco Bicycle club received and entertained Thomas A. Stevens on his return from his trip around the world in November, 1886. From time to time the meeting place of the club was changed, and not until this year has it been comfortably housed. An incorporation was effected on the 14th of last month, and soon after the elegant residence on the southwest corner of Golden Gate avenue and Polk street was leased. The building has been refitted and furnished, and the club will give a housewarming next Friday evening which promises to be one of the most notable events in its history. Recently the club has gained many new members, and seems to have entered on a new era of prosperity. Its officers are as follows: Thomas R. Knox, president; H. J. Foley, vice-president; Thomas R. Cobden, secretary; B. T. Edwards, treasurer; Will I. Pixley, captain; Fred Hess, first lieutenant, and L. H. Cox, second lieutenant.

Captain Pixley writes from "Red (hot) Bluff" that he is having a great time. He has ridden over a big part of the State, inspected Senator Stanford's ranch at Vina, looked upon the wine when it was of various colors, swam in the river, and talked bicycle to every man, woman and child he met.

CHAT ABOUT THE CYCLE. - The Steady Growth of the New California Club. - Articles of Association of the Proposed Federation - The Enterprising Acmes - Sunday Runs - The San Francisco Call, 01 Aug 1892