EVENTS AMONG THE LOCAL WHEELMEN.

The Referee's Decision at the San Jose Races Has Been Protested Against by Foster.

The rains of the past week have interfered with the plans of the various club captains, and it may be possible that the events scheduled below will be postponed.

The league election, which will be held next month, is already attracting attention, and the office-seekers are laying their wires. The election this year bids fair to be well contested, as this Coast has five clubs belonging to the league, and, of course, each one wishes to be represented on the governing board.

The Diamond race meet at Napa, which will be the closing race meet on the Pacific cyclist circuit, is sure of a large entry list, and the races should be of the best.

The holding of the annual parade of the California Associated Cycling Clubs this year at San Jose was attended with much dissatisfaction, and, from recent disclosures made by prominent members who are on the inside, it seems quite possible that this function will be abandoned in future.

For some unaccountable reason the various clubs did not take the interest in parading which has marked this part of the programme in previous years, and the Garden City Cyclers, who had offered $150 in prizes, felt that it was poorly repaid by the slim attendance in the parade line.

It is proposed to substitute a track relay race in place of a parade at next year's celebration, the teams to be composed of class A men from each club affiliated with the association. The regular races will be run as usual in the afternoon. The matter will come up for consideration at the next meeting of the association. 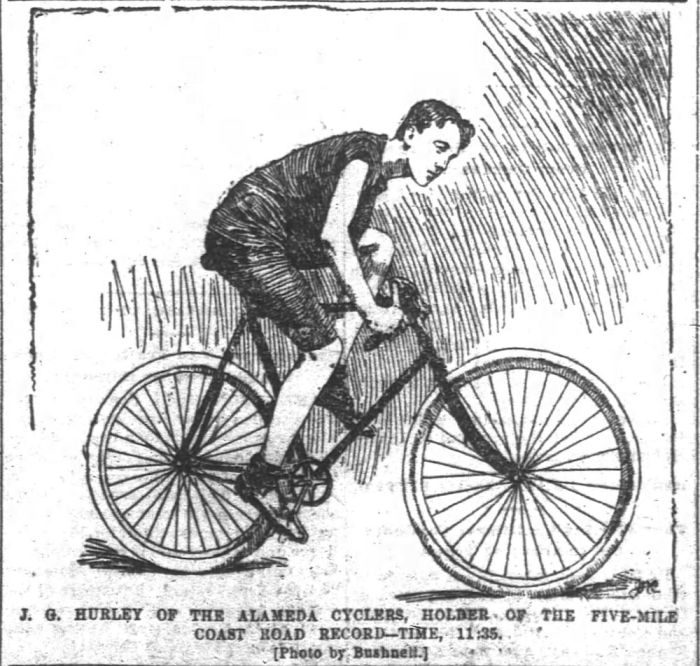 The races last Monday at San Jose have been prolific of much comment, owing to the decision of the referee in the one-mile scratch class B race, and the end is not yet. Foster, who won the first final, and then refused to ride in the second final after the referee had called the previous race a "no race," has entered a formal protest against the decision, and, in consequence, the prizes will not be awarded until a decision from the national racing board, League of American Wheelmen, is received. Reference to the league racing rules for 1895 reads:

1. The racing board shall have the power to make such rules for its government at cycle race meetings as may be deemed expedient, and may appoint one or more official handicappers at its discretion.

In the track rules article 3 is as follows: The referee shall have general supervision at the race meeting. He shall give judgment on protests received by him, shall decide all questions or objections respecting foul riding or offenses which he may be personally cognizant of or which may be brought to his attention by an umpire or other officer. He shall act as he may think for the best in cases of misconduct by attendants, and shall disqualify any competitor for the event, day or meet who may become liable to disqualification. He shall decide all questions whose settlement is not otherwise provided for in these rules. His decision in all cases shall be final, providing his decision does not conflict with any of these racing rules, in which case a protest must be made, prizes held and an appeal made to the racing board. No appeal will be considered that has not been made within one week from date of meet, etc.

There also appears in section 23 the following: The referee may place a time limit on any race except handicap, team and lap races. The time limit shall not be announced to the contestants until their arrival at the tape preparatory to the start of the race. If the competitors finish within the limit they shall receive the prizes. If they fail to so finish, and the referee is convinced by their riding and the time, that they endeavored to reach the limit, he may award the prizes. It shall be his privilege to withhold any prize if, in his opinion, any competitor did not try to win the race.

As regards this race, Foster claims that, as Jones had the coveted position behind the tandem, and he did not watch the tandem from his place in the rear, he was not to blame that the pace was slackened on the second third pole, but had he been in Long's place he could have jumped the tandem and easily won out. The fact that they all loafed on the beginning of the last lap was plainly perceptible, but Foster takes the stand that no limit was placed on the race, and consequently the referee overstepped his bounds when he ruled this final a "no race." Perusal of the foregoing, which are extracts from the racing rules bearing on these particular officials and for just such cases, would tend to show that the stand taken by Foster is right.

It is to be regretted that any such exhibition should take place, as it tends to embitter the public against cycle racing, but surely because the officials neglect to take the precaution of placing a time limit on a race and the racer who gets the coveted position behind the tandem gets "baked," is no reason why the public, press or officials should insist upon having the aforesaid race run over again. The decision of the national body will be eagerly watched for, and intending race promoters will do well to guard against future occurrences.

It should be said to the credit of Foster that even after the referee's decision, he rode in the two-thirds-mile handicap, class B, although at the time it was much commented on that in the heat where Foster rode the limit man had 100 yards, while the nearest man to him had twenty-five yards handicap. In the second heat in which the Garden City Cyclers' favorite, Wilbur Edwards, was entered, it was noted that the limit man, who by the way was also one of his own clubmates, had only sixty-five yards handicap, and his nearest man was on the fifteen-yard mark. It is contended that in the so placing of these handicapped men, the Garden City Cyclers intended to distance Foster to the benefit of Edwards, but it seems barely possible that such was intended, although circumstances point in that direction.

James Joyce Jr., while on his way East, stopped over for a few days to visit Miss Alice I. Garrison and her parents at their lovely villa in Forest Hill. Some very enjoyable bicycle trips were had while there, and Mr. Joyce intends returning to California at an early date.

The closing event of the Pacific cyclist circuit will be held at Napa on September 19th, 20th and 21st, for which valuable trophies will be awarded. The programme as announced is as follows:

In the one-mile scratch, class B, post race, it is the intention of the management to award diamonds to the rider who is ahead at the quarter-pole, and also in the five-mile lap race, class A, which takes place on the last day, diamonds will be awarded to the rider leading at each lap. In this manner the public can be assured of exceptionally fast riding, The entries for these races close to-day with Edward S. Bell, secretary of the Napa Wheelmen.

Mr. Ravlin is the authority that fully $1000 in diamonds will be offered as prizes at this meet.

H. H. Goddard of the Bay City Wheelmen and his brother were on their way to attend the races at San Jose Thursday evening when a baker named Egenberg of Alameda, who has a particular dislike for wheelmen, blocked their roadway, and by so doing caused a complete wreck of Goddard's wheel and hurt him. Egenberg was arrested on Saturday last and will be prosecuted by the League of American Wheelmen, Mr. Goddard being a member of this powerful body.

The Liberty Cycling Club, Outing Road Club and Bay City Wheelmen each have a five-mile handicap road race scheduled for to-morrow over the San Leandro-Haywards course.

Captain Korn has called a run of the San Francisco Road Club to San Leandro to-morrow to witness the race of the Century Road Club. Members will meet at the clubrooms at 10 A. M. sharp. On Tuesday evening last the San Francisco Road Club banqueted President Dr. Rottanzi, J. G. Maguire and J. Schwartz of the South Side Improvement Club. A very enjoyable evening was spent, and the "good road" and "boulevard" question was thoroughly discussed.