AN APPEAL FOR BITUMEN.

Mass Meeting of South Side Residents.

FOLSOM STREET MUST BE IMPROVED.

Speeches by Congress Maguire and Others and a Parade by Bicycle Riders.

The "Night in South Side," held in Columbia square last night, was very much unlike the recent "Night in Venice” held in Belvedere, save for the crowds. Those who were present at the Venetian celebration were there on pleasure bent, but the mass of men and women who blocked Folsom street, from Sixth to Seventh, last night, were there for business.

A large platform was crowded with willing speakers early in the evening. Japanese lanterns hung from the neighboring house tops and were strung down the 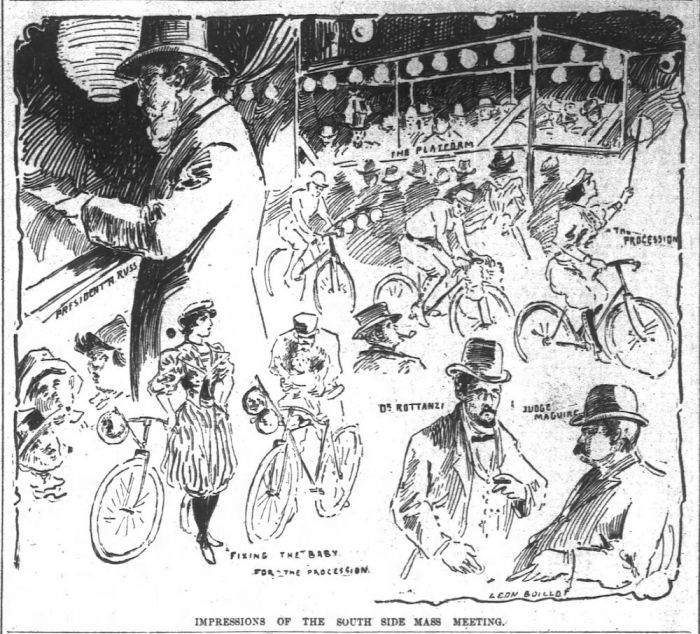 IMPRESSIONS OF THE SOUTH SIDE MASS MEETING.

street; huge sizzling rockets were sent soaring to the sky at regular intervals; a big brass band played merry tunes while little children danced on the sidewalk, and the members of a score of bicycle clubs, prime movers in the matter of South Side improvements, with their wheels gayly decorated, spun in and around the great crowd and won its cheers.

The meeting was opened with a short speech by Henry B. Russ, [uncle of Robert R. Russ] president of the evening, and he was followed by Dr. T. Rottanzi, president of the South Side Improvement Club. C. M. Shortridge, Congressman J. G. Maguire, James A. Barry, Bert Schlessinger, George D. Chadbourne and G. A. Raabe also made addresses.

None of the speakers took more than ten minutes to address the crowd, but all that was said was forcible and to the point and of the same tenor. It was said that the Board of Supervisors should not only be asked, but required to have Folsom street paved with bituminous rock. That the residents of the South Side had suffered the contempt of Supervisors long enough, and while they had seen the northern part of ihe city improved and its residents benefited by the money of the great army of taxpayers, they had also seen the southern districts left to run to ruin. It was the general opinion also that Folsom was the widest and best street in the Mission and that it was only a small thing for the residents to ask the Supervisors to make it presentable with bituminous rock.

After the speeches an original song, entitled "The Folsom Boulevard," composed by Sam Booth, was sung by a quartet consisting of L. A. Larson, J. W. Maguire, R. P. Evans and Sam Booth.

The following resolutions were adopted, and will be presented to the Board of Supervisors to-day:

Whereas, Your honorable body did order the finance committee to make provision in the tax levy, for a sum sufficient for the paying with bitumen of Folsom street from East to Nineteenth street so as to make this street uniform, seven blocks being already bituminized; and, whereas, the said Finance Committee did not make such provision, but did override the wishes of the taxpayers and property-owners; therefore, be it

The moonlight parade of wheelmen to Columbia square created something of a sensation and was watched by hundreds. The parade was divided into two divisions, the northern under command of Captain L. L. Korn of the San Francisco Road Club, and the southern under command of Captain J. F. Burk of the California Cycling Club. The northern division marched from Golden Gate avenue and Franklin street down Golden Gate avenue to Market; to Third, to Howard, to Sixth, to Folsom, to Columbia square. The southern division marched from Folsom and Twenty-second streets down Folsom to Twentieth, to Shotwell, to Fourteenth, to Howard, to Russ, to Folsom, to Columbia square. In the lines were the following clubs: Waverly, Crescent, Pathfinder, Outing, Golden Gate, Sunset, Lowell High School, California, Liberty, South Side, Polytechnic, Monarch, Alpha, Camera, San Francisco Road, Imperial, Bay City and Royal.