Folsom Street to Be the First Object - Re-pavement From Fourth to Nineteenth Will Be Demanded.

"The Mission" is going to make the first a move for good streets.

There will be a meeting at the corner of Twenty-second and Folsom streets tonight, aimed at good streets for the city generally and for the Mission in particular.

The Mission residents are going about the matter practically. They are going to have one thoroughfare properly improved, and when that has been accomplished they will turn their attention to some other place upon which to exercise their energies.

The object of this meeting will be to take such action as will compel the improvement of Folsom street before the electric tracks are laid thereon. They will demand that the thoroughfare from Fourth to Nineteenth streets be repaved by the city, as it is at present below the official grade, and being an accepted street the city must do the work.

When the property owners along the street became aware of the situation a committee of them waited on the Street Committee of the Supervisors and requested them to repave the street with bitumen instead of using the basalt blocks with which the street is now paved.

The representatives of the property-owners were asked what the difference in cost would be to the city, and were not prepared to answer off-hand. They were then asked to secure estimates and submit them to the Street Committee, which will meet to-morrow morning.

The repaving of the street will be a large undertaking, as the cost is estimated at over $50,000.

The cost to the city will be less for bitumen than for basalt blocks, as, owing to a recent order of the Street Department, the latter must hereafter be placed on a bed of concrete.

The exercises to-night will, in the main, be impromptu. Mayor Sutro and all the city officials have been especially invited, and many of them have declared their intention of being present. The Merchants Association has a meeting of its executive board, and if they can finish their business in season they will attend in a body. The Directors of the Mechanics' Institute are interested in the movement and will be represented by some of their number.

The League of American Wheelmen, in addition to their represeаtatives on wheels, will also have Chief Consul Melrose, R. M. Welch and T. R. Knox.

The Half Million Club will also be represented by a committee from its membership.

The spectacular features of the evening will be supplied by the wheelmen, who have accorded the movement their heartiest support from its inception. Seventeen of the clubs have called runs in order to participate in the exercises, and unattached riders are urgently requested to be present and assist in carrying out the cycling part of the programme in a creditable manner.

The California Cycling Club and others will furnish their members with Chinese lanterns, thus adding to the picturesqueness of the parade.

This is the first occasion in this city, since cycling has assumed any proportions, when the wheelmen have had an opportunity to show their combined strength, and they will await themselves of the opportunity.

The Cycling Committee having in charge the parade consists of H. H. White, F. Day and H. F. Wynne. They have sent out the following circular:

The long lists of names attached to the Wheelmen's Petition are beginning to come in, but the monster one of all is yet to be received. It is in The Cyclery, near the Park, and reaches from the ceiling down the wall to the floor, a distance of nearly twenty feet. The following letter tells its own story:

To the Editor of the Examiner - Sir: At a meeting of the Pacific Cycling Club, held this evening, it was unanimously decided to indorse the Wheelmen's Petition for Good Streets.

Wishing you success in your undertaking, we are very truly yours,

To the Editor of the Examiner - SIR: I hope you will continue to agitate this matter until good streets are secured. London's streets are good, because there always is a foundation of concrete, honestly mixed and properly laid, and the topping is either bitumen, wooden blocks, stone blocks or macadam.

Good streets should include good crossings. If you should walk from the ferry to Jones street upon the north side of Market you will find nearly every crossing uneven, which in wet weather produces pools of water of depth unpleasant enough to step into.

One very necessary preliminary towards good streets is to have all unused or abandoned car tracks removed. Bush street would make a good boulevard and just the street for bicyclists if these unused tracks were taken up and the entire width of the street bituminized. The entire length of Bush street is occupied by three different car lines. The middle company (the block between Kearny and Montgomery streets) is of a different gauge from the others, and it does not connect with any other track, and all of that track has been unused for very many months.

Good crossings require a narrow gutter next to the curb to carry off rain water. As many of them are now there is a pool or river too wide for a lady to step over, and consequently she ruins her beautiful shoes and perhaps her angelic temper suffers. Yours truly,

From Dr. McNutt the following letter has been received: 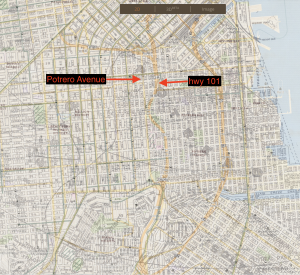 I think Dr. McNutt is describing the future highway 101. We can see in this georeferenced 1895 Guide map of the city & county of San Francisco that it provides "... a magnificent boulevard south of Market street by projecting Potrero avenue to the San Mateo line, and from its present terminus at Tenth street in a direct line to Market street." Highway 101 in San Francisco was built in 1947.

TO THE HONORABLE, THE BOARD OF SUPERVISORS OF THE CITY AND COUNTY OF SAN FRANCISCO:

WHEREAS, The bad condition of the street pavements of this city is an annoyance to all citizens, lessens the attractiveness of the city to visitors and tourists, makes hauling expensive through the injuries suffered by horses and wagons, and closes most of the thoroughfares of the city to riders of the bicycle in pursuing their vocations, going to or from their business or riding for pleasure:

THEREFORE, The undersigned, representing the 25,000 wheelmen of the city, do respectfully request your honor able board: First - To re-pave Market street and such other of the accepted streets of the city with a smooth, durable pavement as will give the wheelmen a clear passage to the business parts of the city and the ferries from the Western Addition, the Mission and the other residence districts.

Second - To make and enforce such regulations as will insure the laying of smooth, durable pavemen's on the streets offered for acceptance.

Third - To mike and enforce such regulations as will keep the heavy trucking off the smooth-paved streets.

Fourth - To provide for prompt repairs to the bituminized streets in case of wear or break. And for this your petitioners will ever pray, etc.