Fox Will Represent Southern California at the Fair Races.

SMITH OF THE GARDEN CITYS.

Young Cyclist From Whom Great Things Are Expected - Howard Raymond, Chairman of the National Racing Board, and Local Representative R. A. Smyth - Classification of Wheelmen.

Louis W. Fox of Los Angeles will represent Southern California at the Midwinter Fair races and is probably the fastest track rider in the south. He rode a wheel for the first time March 1, 1892. It was a forty-pound cushioned machine, but was quite a feather weight beside the majority of wheels at that time, so that when the Y. M. C. A. of Riverside gave a race meet he traded his wheel for a forty-pound pneumatic "racer" and entered his first race, a handicap, getting the limit, and winning easily. 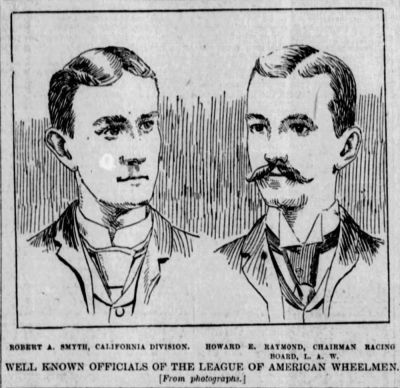 "Since then," Fox writes, "my racing experience has been the same as the average, winning probably a few more races than I lost. On May 30th of last year," he adds, "I was in very good condition, but was unfortunate and won nothing, not even getting credit for breaking the three-mile record, which I lowered 37-1/2 seconds, for the judges lost count of the laps and we were obliged to ride a lap more than the distance. This was the only record that I really cared about.

"One month later with the Victor aggregation I went to Frisco, surprised myself by defeating the Coast champion, Walter Foster, and lowering the two mile record. At this meet Mr. Zeigler treated me to the process commonly known as 'rubbing it in.' I was able to win what was styled the 'Pacific Coast Championship.' but which, owing to the absence of Foster and Zeigler, was something of a farce."

Fox has made several trials against time, among which are: Two-mile (official) in 4:47-3/4, which is the Coast record; seven separate trials for the standing hundred, of which five were official, the time being 9 seconds flat each time; on two occasions he did 5 seconds flat for the flying hundred yards, and flying quarter in 30 seconds for straight away and 30 2-5 for quarter-mile track; aiso 32 1-5 standing quarter on one-fifth mile track; unpaced flying half (official), 1:04 4-5; standing, 1:07 1-5.

As the San Jose track, where Fox will do most of his training, is in perfect condition, this speedy southern rider will be able to cut these records of his considerably, I predict. He has done the mile in 2:19, and ought to cut ten seconds off that this year.

Louis Fox has had but two falls since he began racing, and in the first did not get a scratch. He has already won over $2,000 worth of prizes, and as he will be a class B rider this year he ought to end the season with better success than all former seasons combined.

The Riverside Wheelmen, under whose colors Fox always rides, is the oldest club in Riverside, has quite a large list of members, and is in quite a prosperous condition. The club is very enterprising and takes a great deal of interest in its team's work. On October 3d they won the first five positions in the Eastside Cup twenty-five-mile road race. Fox won second position in this race.

"The most pleasurable part of my racing experience," thinks the Southern champion, "was viewing the international meet from the grandstand with Wilbur J. Edwards, who is now Coast champion. Upon my return, on the 1st and 2d of October, I attended my most successful meet, and, though I only entered two races, those two included the big piano race, which, together with the half mile open, brought me in some $750 worth of prizes. On September 9th at Riverside I entered, but in vain. Rode on Thanksgiving at Los Angeles, and was disqualified in my heat of the open, in which I defeated Ulbrecht of Chicago, rode in the two remaining races, a mile lap, which I won, and two-mile handicap, in which I beat the scratch men. Have won a few races off and on since." 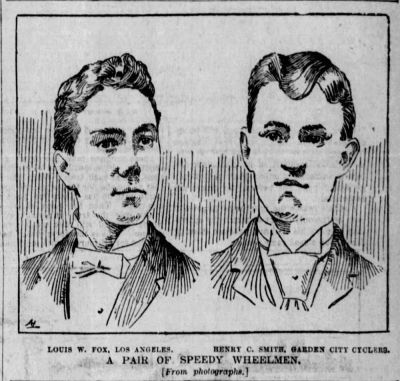 Henry C. Smith of the Garden City Cyclers' team was sixteen years old when he first began bicycle riding, and at seventeen he began making century runs and doing some racing. At that time he was a member of the Garden City Wheelmen, which was started in 1886. This club combined with the San Jose Cyclers and formed the Garden City Cyclers. Henry C. Smith's first race was on New Year's Day, 1889, at Haight-street baseball grounds in this city. He won the novice race and took several other prizes that day. That senson he won many prizes on both track and road. In 1890 Smith won the Coast championship at the California division neet of the League of American Wheelmen. In 1891 and 1892 Smith kept on winning prizes on the ordinary, or the high wheel as it is better known. Last year he took up the safety or low wheel and made a good showing, riding a close second in the division championship at Central Park track. Smith is but five feet six and a half inches tall, though he weighs 150. His work in the first relay of the great race on the 8th shows what he can do, and he will be a top-notcher.

I first knew Chairman Howard E. Raymond of the National Racing Board when he was one of the strong road riders of the Brooklyn Bicycle Club. I believe at that time he was Captain. The first official position I remember his occupying was that of timer at the Buffalo tournament of 1890, when Van Waggoner won the 100-mile road race. He made an excellent timer, though I believe he got caught that day on the fake telegram gotten up by "Birdie" Munger, announcing Austin Crooks as running away from the great Van Waggoner and being hours ahead of the world's record, though thirty miles from the finish.

Howard Raymond was always of good judgment, and when he was appointed on the National Racing Board, after serving on the New York State Division Racing Board, those who knew him best looked for great changes, while to most of the country he was unknown. He did not disappoint his acquaintances and was soon Chairman, which office he has filled for several years and so ably that he needs no praise.

The classing of amateurs to cover the promateurs and makers' amateurs is a scheme of Chairman Raymond and it is already working well. Though a young man, and one of the youngest on the L. A. W. Board of Officers, he has shown himself to be the best Chairman the Racing Board has ever had. One of Raymond's fancies is a very light gray suit and the ultra-English cap, and Howard loves a joke as well as the next man.

As California is so far away from the center of the league's membership, it is impossible to have a member of the racing board on the Coast who can attend all the meetings of the board, and to make up for this the precedent has been formed of having members who act directly under the Chairman's personal instruction and only report to him, thus saving the necessity of attending the meetings of the board. Robert Ashington Smyth, a former racing man, has occupied this position for the Coast several years and has been very satisfactory to all. Colorado and Utah also have similar agents of the Chairman of the National Racing Board.

Robert A. Smyth was at one time a member of the Bay City Wheelmen, and was quite successful as a racing man on a high wheel. Since the safety bicycle has come into use he has given up racing and only rides for pleasure. He is one of the best posted cyclists in America, as he has a memory for things cycling, and especially racing matters. Mr. Smyth, besides representing the national racing board of the League of American Wheelmen, is Chairman of the racing board of the North California Division of the League of American Wheelmen. For a number of years he has been the active correspondent of The Wheel, which is one of the best known wheel papers, so that Mr. Smyth is a busy man, for he has enough for one man to do in his mercantile work.

The most important thing in cycling racing at present is the dividing of the racing men into Class A and B, and I have asked Chairman Smyth to define the distinction, which he thus sums up briefly:

"In order that local racing men may understand the new Class A and B amateur definitions the following has been compiled from such fragments of information as have reached this Coast: In Class A the amateur definition of last year still applies, with the addition that no prize shall exceed $50 in value, and that a rider shall not compete outside his own State, or over 200 miles from the location of meet. He must not compete with a professional or amateur of Class B. He must not accept for cycling any compensation or expense whatever.

"Class B is a most liberal rule, and permits a man to remain an amateur provided he does not race for a money prize. He may be in the employ of and have his expenses paid by a manufacturer of cycles, club, or other parties interested in cycling. All division championships will be open only to members of Class A. The National championships are open to both classes."