Emil Ulbrecht, who made such a good showing against Foster in the 25-mile race last Sunday, has returned to Los Angeles, where his business interests are, but will be back here in April and will ride in the great 100-mile relay as a member of the Bay City Wheelmen's team. It is likely that F. G. Lacey will also come up and ride for the same club. 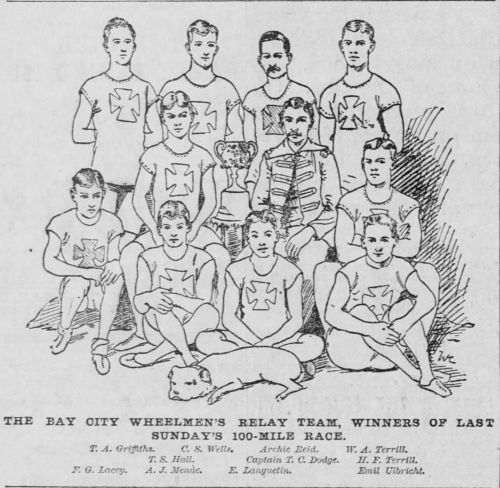 A very good picture is presented herewith of the winning team, that of the Bay City Wheelmen, the personnel of which is as follows:

At One Time a Champion Bicycle Rider of This Coast and of Chicago.

Emil Ulbrecht, at one time one of the fastest bicycle riders in California, was drowned at Honolulu on the 15th inst. Deceased was a member of the Bay City Wheelmen and carried the Maltese cross, its emblem, to victory in many famous races. On two occasions he practically won the annual hundred-mile relay race for his club, gaining so much distance on the men pitted against him that the result was never thereafter in doubt.

He was originally from Chicago, where he gained fame as a road rider, capturing first prize on one occasion in the great Pullman road race from Chicago to Pullman. He then removed to Southern California, where his talent as a mechanic was in demand. From Los Angeles he made several racing pilgrimages to this city. He was at his best on the road, but was also a factor in several big handicaps.

He met his death near Honolulu at Makapuu Point. He was searching for sea shells with Harry Moore, D. E. Hayes and a young man named Rylander. The men removed their clothing and walked along the rocks beyond Koko Head. Ulbrecht was swept off the rocks by the heavy waves and carried beyond the reach of his friends. Moore was thrown off his feet at the same time and nearly drowned. The three men saw their friend drowned, but were unable to render him any assistance owing to the fury the water at that point, which kept sweeping the doomed man away from them. The body was not recovered. Ulbrecht leaves a wife and three small children. He was 28 years of age and employed at the iron works in Honolulu.