CHAT ABOUT THE CYCLE. - The San Jose Road Club and Its Members. - General Interest in the Race Meets to Be Held To-Day - High Jinks in the Redwoods. - The San Francisco Call, Jul 4, 1892

The San Jose Road Club and Its Members.

General Interest in the Race Meets to Be Held To-Day - High Jinks in the Redwoods. 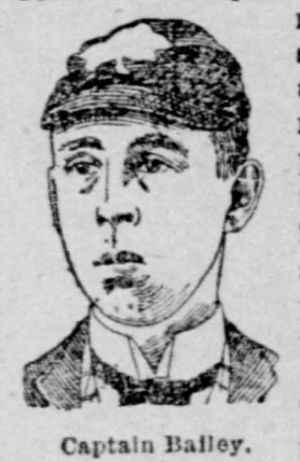 The San Jose Road Club, although a young organization, is showing a degree of vim and enterprise not always found in older associations of wheelmen. It was formed on April 7, 1892, with ten charter members. Its ranks have since been considerably augmented, and several recent applications are pending. The object of the club is to advance the interests of road-riding and racing for the purpose of physical improvement and the promotion of amateur sport. The club's emblem - an ivy leaf, symbolic of friendship and union - is worn by some of the best riders in Santa Clara County. The club's colors are straw and lavender. About half of the members belong to the L. A. W., and the others have declared their intention of joining, the ultimate intention being to make the organization a league club. W. E. Berry represented the club at the Decoration day race meet in Alameda and developed considerable speed. He promises to be heard from in future events. Two of the members will be seen on the track at Alameda to-day, and will endeavor to carry the ivy leaf to the front. The present officers of the club are as follows: William L. Parker, president; C. A. Heppe, vice-president; C. J. Belloli, secretary and treasurer; W. E. Berry, sergeant-at-arms; J. T. Bailey, captain; O. Ziegler Jr., lieutenant; A. M. Hobson, color-bearer; J. G. Minor, bugler.

The midsummer jinks of the San Francisco Bicycle Club were held on last Tuesday evening at the "Cyclers' Retreat," in one of the big redwood groves of picturesque Marin. The trees were decorated with handsome lanterns and the camp illuminated with bonfires, giving a weird aspect to the beautiful valley. At 8:30 o'clock the guests began to arrive, and the rustic arch at the entrance was lit up by large pans of red fire and blue lights. At 9 P. M. services were begun around one of the bonfires with songs and comic speeches. Later there was dancing in the main pavilion, followed by a grand supper, cooked and served to the King's taste. There were many toasts. The first, to Mr. Edwards, the leader of the camp, was responded to by that gentleman in flowery language. Others were in honor of "Larkspur," "The Cycler's Retreat" and "The San Francisco Bicycle Club.” The music for the dancing was rendered by an amateur orchestra, ably led by Miss Gruenhagen.

The San Francisco Bicycle Club held a fine run to Haywards yesterday. The day was perfect, and the crowd seemed to be in just the mood for enjoying a run and a good lunch at the Haywards Hotel. The official photographs for the year were taken, and are to be framed and hung in the clubhouse. Mr. Cobden, who did the photographing, says that the groups are the best he has ever secured. For a wonder the whole number present kept well together, which is a pleasant feature in a club run. The ladies rode remarkably well. The return was made through Alameda, and the good streets were greatly appreciated. The San Franciscos will be at Alameda in time for this morning's proceedings, remaining for the lantern parade in the evening, and will occupy a good part of the grand stand at the races. All feel confident that they will see many records broken and the finest race meet the coast has ever seen.

Captain Pixley has called off the run to Larkspur Camp on July 17. He has called a moonlight to Alameda for Friday evening, July 8. The members will take the 7:30 boat, and hope to meet the A. B. and A. C. boys and the ladies of the annex.

The Santa Rosa wheelmen are coming to the front. They will go to Healdsburg today, and will be a prominent feature of the parade. The club has adopted for their colors sapphire and mandarine, and have also chosen a handsome new badge. The badge is of sapphire and reads, "Santa Rosa Wheelmen, Organized April 27, 1882, Santa Rosa, Cal.” There is also printed on the badge a picture of a bicycle running at full speed propelled by the club's enterprising president. The membership of the club is steadily increasing.

The following are the entries for the annual meet of the California division, L. A. W., to be held at Stockton to-day under the joint auspices of the Bay City Wheelmen and the Oak Leaf Club:

The Merced Bicycle Club will hold a racing meet to-day. Among other novel features there will be a slow race for members only.

Of course the principal event of the glorious Fourth in cycling circles will be the races given under the auspices of the Alameda Bicycle and Athletic Club. The list of entries already published in THE CALL includes nearly all of the crack riders of the State, and it will not be the fault of Foster, Bell, Edwards or Osen if several coast records are not lowered. The track is in better condition than ever before. The parade through the principal streets in the forenoon will be well worth seeing, but the lantern procession in the evening is expected to eclipse anything of the kind ever seen in the State. After the fireworks there will be a reception to visiting wheelmen in the spacious pavilion on the club grounds. During the afternoon James Ordway will give an exhibition of trick riding on a safety.

The following are the world's records up to date for distances up to two miles:

Other records are given on the programme of the Alameda races, but the above will be found of value for reference.