CHAT ABOUT THE CYCLE. - Organization and Growth of the Pacific Road Club. - The San Francisco Call, 27 Jun 1892

Organization and Growth of the Pacific Road Club.

An organization of wheelmen that is rapidly coming to the front is the Pacific Road Club of this city. It was organized on November 5, 1891, with the following charter members: A. T. Jansen, J. J. Zimmer, E. S. Battles, Edwin Mohrig, J. C. Luby, L. L. Murch, H. Kuster, A. J. Aiken, Thomas D. Colestock and J. F. Hancock.

The name under which the club has since been known was adopted after it had been decided that its main object should be the promotion of road-riding.

Meetings were held regularly at 112 Golden Gate avenue until the present comfortable club-rooms at 321 Van Ness avenue were secured. The club has been active from the start. The membership has steadily increased and is composed almost entirely of young men who are not only good riders but good fellows as well. The uniform is of a bluish slate color and is one of the neatest on the coast. It is frequently seen grouped in club rooms or in single suits speeding along the roads around the bay. A beautiful badge, consisting of a front view of a bicycle wheel on wings, inclosed in a golden circle on which is the club name in enamelled letters, has also been adopted.

In order to decide the much-mooted question of the relative speed of its members the Pacific Road Club recently made arrangements for a five-mile road race, which was run yesterday on the San Leandro triangle. The start was made at 10:30 A. M. The men rode in a bunch, with C. Hazel in the lead, for the first mile, which was over the roughest part of the course. Then Captain Hancock took the lead and held it to the finish, the pace being made part of the way by several of the Alameda County wheelmen. The first prize, a handsome gold medal designed after the club emblem, was won by Captain Hancock, whose time - 16:11- is very good, and is said to be by 3 seconds the best yet made for a similar distance on the triangle. Lieutenant Battles came in second, his time being 16:50. The judges were Jessie Hazel, P. R. C., and C. E. Belloli, S. J. R. C. Starter and timer, V. A. Hancock, P. R. C. 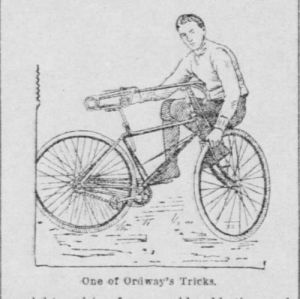 One of Ordway's Tricks.

The accompanying cut will give an idea of one of the difficult feats performed on a safety by young James Ordway, an amateur rider of this city. Seated on the front wheel he maintains the machine in an upright position for a considerable time and then, without allowing it to fall or touching the ground, climbs over the handle bars and assumes the regulation position in the saddle. He can also ride the safety on the rear wheel alone for blocks, besides accomplishing many other remarkable tricks. Ordway was employed at [the bicycle academy at the pavilion when Dan Canary was here], and got his first ideas in trick-riding from that peerless expert.

The San Francisco Bicycle Club had a club run to Redwood City yesterday which was attended by a large number of the members. Prominent among those present were: Lieutenant Cox, who had charge of the run; Messrs Scovern and Twitchell, the celebrated pacemakers; Cobden, the sylph; Clark, the falcon; Bernard, the searcher, and Chrissensen, the heavyweight. The start was a late one, and the pace being one of genuine comfort, Redwood City was not reached until noon.

Cobden having telephoned for an extra fine dinner, the genial host of Price's Hotel was prepared to meet the club, and here ample justice was done to a most excellent lunch. The return was begun at 2 P. M. sharp and there being but little wind the city was reached a few minutes past 5 o'clock.

Every member voted the run a success. One pleasant feature of it was the fact that all stayed together, the pace being made an easy one, so that none were left behind.

Captain Pixley of the San Francisco has announced that a club run will be had to the grounds of the Alameda Bicycle and Athletic Club on July 4, leaving this city on the 9 o'clock boat. Tickets may be obtained from the secretary, and it is hoped that every member will attend. There will be a parade of all the assembled clubs through the principal streets of Alameda in the morning, races in the afternoon and a torchlight procession followed by a ball in the evening.

Captain Pixley also gives notice of a grand rodeo and all-round good time at Larkspur Camp on July 17. This is designed to be a regular high jinks on wheels.

Yesterday morning five active members of the San Jose Road Club rode up to San Leandro to see the race of the boys from this side of the bay. After congratulating Captain Hancock on his victory, they went on to Alameda, where they took a few turns around the track before returning home. They will be seen again on the Fourth. The quintet consisted of C. J. Belloli, C. E. Pomeroy, T. E. Berry, Al Lewis and A. M. Hobson.

The Acme Club of Oakland had a very enjoyable picnic run to Laundry Farm yesterday. They were accompanied by a number of members of the bicycle annex to the Olympic Club of this city and a contingent of "trampers” - that is, unfortunates who don't push pedals.

Mr. and Mrs. Charles Plunkett of the Francis Wilson Company, now playing in "The Lion Tamer," are enthusiastic cyclists. On Thursday they made a run from Oakland to Haywards and return.

Frank Waller has gone to Southern California. He is entered in the Los Angeles - Santa Monica road race. The distance is 18 1/4 miles, and he is looked on as a sure winner.

The south is awakening to the importance of cycling as an athletic sport. Besides the races at Los Angeles on the Fourth of July there will be a series of speed contests at Riverside.

Preparations are now complete for the league meet at Stockton. The track is reported to be in excellent condition, and many speedy racers have entered. The Bay Citys and Oak Leaf Wheelmen are determined to make the meet a success in every respect.

There is sure to be a big crowd at Alameda on the Fourth. Already 75 entries have been received for the events announced by the Alameda Bicycle and Athletic Club, and several others are expected in-day. Osen, the San Jose champion, will be on hand with Edwards of the same city, and this strong pair will make the pace hot for Foster and Grant Bell. Leipsett will again be "in it" with his ordinary, prepared to meet all comers.

Needham and Delmas have decided to go to Stockton. Stoddard, and probably Upson, will also compete in the Slough City races.

The novice race at Alameda, for which there are many entries, is expected to develop some surprises, as did the similar event on Decoration day.

The issue in the next presidential campaign in the League of American Wheelmen will be based upon cash prizes versus pure amateurism. It is said that Charles S. Luscomb, chief consul of the New York State division, who is a stanch advocate for cash prizes, will be a candidate for the office against Colonel C. L. Burdett, the incumbent. Mr. Burdett is a strong believer in the pure amateur.