Byrne May Be Forced into Class B, Will He Join the Olympics?

The racing at San Jose on July 4 attracted the greatest attention the past week. J. E. Edwards of the Olympic Club Wheelmen surprised his most ardent admirers by his wonderful bursts of speed. Wells, the Bay City crackerjack, was in splendid form and won both class B events. By the cheers he received one would think he was a resident of San Jose, and hịs victories were surely very popular. Captain Delmas of the Garden City Club has not raced for several years, but decided to try his hand at the game again, and showed he had not lost his speed, by winning the one-mile handicap class A quite handily. The accident in which Byrne and Languetin fell was quite unfortunate, but both are receiving the best of care and will soon recover from their bruises.

There will now be a lull in cycle track racing for some little time. In fact it seems improbable that there will be any meet of importance in this part of the State prior to September 9, when the Garden City Cyclers will hold another meet at San Jose. This will be a big affair and will doubtless draw the best racing talent of the State. It is possible, also, that some of the Eastern men may be here about that time, in which event it would be doubly interesting.

The Acme Club Wheelmen will hold a ten-mile road race over the Fruitvale-Haywards course on July 28. This will be a big event, as the Acmes are noted road riders, and it would not be at all surprising if they lowered the existing record.

Captain John Kitchen Jr., J. W. Wright, C. J. Gannan and J. H. Creeley of the Acme Club Wheelmen will start next week on a wheeling trip to Lake Tahoe, and will be on the road two weeks.

The Golden City Cyclers spent July 4 at Sonoma as the guests of the Sonoma Wheelmen. They returned Friday morning. having had a delightful time.

There will be a big wheeling event in the East early next week, the occasion being the annual meet of the League of American Wheelmen at Asbury Park, from July 8 to 13. As there will be several popular Californians contesting with the Easterners the reports of the races will be watched with interest. From all accounts E. C. Bald of Buffalo seems to be the star class B rider on the National circuit this year, but he has to fight every inch of the way when he races against such men as Cabanne, Coulter, Ziegler, Dirnberger, Macdonald or Terrill.

Captain L. L. Korn has called a run of the San Francisco Road Club for to-morrow to Camp Taylor. Members are requested to assemble at the clubrooms, 722 Golden Gate avenue, at 8:30 A. M. sharp.

The Camera Club Cyclists go to San Leandro to-morrow under the guidance of Lieutenant Goodrum, starting on the 9 A. M. boat. They will be the guests of Dr. L. C. Harmons at San Leandro, who has promised to give them carte blanche with his peach and pear orchards. They will have a jolly time surely. Last night the club went on a moonlight run to the beach.

Captain Paulsen has called a run of the Pacific Cycling Club for to-morrow to Centerville, leaving on the 8 o'clock boat. This trip is very pleasant and has added charms on account of the excellent accommodations afforded at Centerville to wheelmen.

The Crescent Road Club members will take the 5 o'clock boat for Stockton tonight and ride back to-morrow. This is a long but very pleasant trip if the roads are not too dusty. George Thompson has been elected vice-president of the Crescents, vice H. Hecht, resigned. Captain A. Bearwald and E. Cohn started yesterday on an extended trip through Lake County on their wheels.

The Bay City Wheelmen should have a merry time to-morrow. At a loss for some new wheeling trip to take the men upon, Captain Dodge decided that for once the wheels should be left at home, and the members will embark on the sloop-yacht Annie E for a ride around the bay and out to the heads. There will be several invited guests aboard, plenty to eat and a sufficiency of those beverages so dear to the hearts of every yachtsman.

The Golden Gate Cycling Club will have a run to Garcia to-morrow, and while there will be the guests of Camp Sazerac. Members will take the 8 o'clock Sausalito boat and train to San Anselmo, riding from that point to Garcia, which is five miles above Camp Taylor. The trip is a delightful one, through one of the prettiest parts of the State. The club has engaged clubrooms in the building of Mission Parlor, N. S. G. W., on Seventeenth street, and will hold the first meeting there on July 12.

The California Cycling Club has several pleasant outings scheduled for this month. To-morrow Captain Burk will lead a club run to Tocaloma, leaving on the 8 A. M. Sausalito boat. On Sunday, July 14, the club will have a run to Walnut Creek, and the following Sunday to Napa, starting the night before. The Californians are getting in many new members, and the time within which applicants may join under the reduced initiation fee has been extended to July 24.

The Olympic Club Wheelmen will probably hold a five-mile road race on either the 14th or 21st of this month. Should Foster, Edwards, Jones or Long start there is a likelihood of Alexander's record of 12:03 and a fraction being a thing of the past. Foster may try for the twenty-fiye mile record over the San Leandro triangle about the middle of August, and should get it if he is properly paced.

Frank M. Byrne, the popular Imperial Club class A man, may find himself in class B very soon unless he can satisfactorily explain a little tire deal in which he was interested. R. M. Welch, representative of the racing board, has written him a letter requiring an explanation, but owing to Byrne's accident at San Jose Thursday will suspend action until he has recovered. It is generally thought, however, that Byrne's class A standing is safe. A rumor was current around the training quarters at San Jose that Byrne had applied for membership in the Olympic Club Wheelmen at the express solicitation of several of its members, and if this is so the Imperial Club will suffer a distinct loss.

The party of Camera Club cyclists now touring through Lake County are having a most enjoyable trip. They were at Bartlett Springs over the Fourth and will be at Vichy to-day. Lake County is a delightful touring ground for wheelmen at this time of the year.

H. W. Eisert and J. F. Burns of the Imperial Club started for Los Angeles awheel yesterday. If they follow the advice of others who have been over the trip recently they will ride as far as Santa Barbara and then take the steamer, as the balance of the wheeling is bad owing to poor roads. 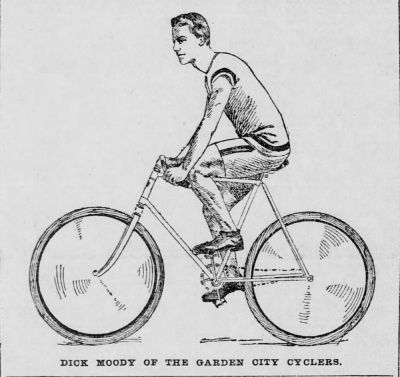 The San Francisco Young Men's Christian Association Cycling Club will hold two races for members only on the Central Park track July 20. The events will be a half-mile scratch and a one-mile handicap. The riders are now in active training for the contest.