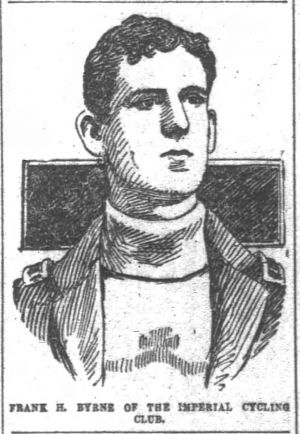 Frank H. Byrne is the Imperial Cycling Club's foremost racer and is a lad but 17 years old. He recently rode ten miles in 27:52 over the Fruitvale-Haywards course in the club's road race. This is but thirty-seven seconds slower than the present Coast record. With a systematic course of training and the roads in good condition, young Byrne will be able to lower this time materiality. He is entered for the Oakland Cycling Club's race, which takes place to-morrow.

[This article refers to him as "Frank H. Byrne." I'm fairly sure we're talking about Frank M. Byrne. An 'M' looks like an 'H,' when transcribed from handwriting. - MF]

The Imperial Cycling Club announces its intention of holding a try-out to select a suitable team for the relay as soon as the roads will permit of riding. At present it is expected that the team will be made up from Messrs. Byrne, Barley, Hurst, Edwards brothers, Reynold, Jagelind, Conger and Cadenich.

There were now lest among the starters Byrne, Rose and Chapman to finish it out, and as pretty racing as one could wish to see resulted between those men. Byrne was determined to keep the lead, and as Rose put on a killing pace, the head man had to keep his nether limbs working to keep Rose in the rear. Spurt after spurt resulted and the spectators went wild from excitement when Rose took the lead and Byrne again shot past and held his old stand.

The Acme Club man rode a great race, no doubt, but try as best he could he was unable to defeat Byrne of the Imperial Club, who won a magnificent race in 27 minutes 33 1-5 seconds. The best indoor record for ten miles is 26 minutes, made by Starbuck, a professional rider. Chapman, who landed third, claimed a foul against Rose, whom he accused of having run into him. The foul was not allowed.

The Imperial Cycling Club intends to hold a five-mile handicap road race over the San Carlos course a week from to-morrow. If Byrne and some of the other speedy ones ride it will be worth seeing.