Camp Taylor for a Sunday Outing.

Camera Cyclers to Be Guests of Their Vice-President at Camp Alta Vista.

The wheelmen have not been particularly during the past week, as they rather felt the need of rest after the recent jollities at the Santa Cruz races.

About 500 wheelmen are expected to attend the joint run and picnic of the California Associated Cycling Club, to be held to-morrow at Niles canyon. Captain John Burke, who is managing the affair, has issued instructions to all the clubs desiring to attend to take the 9 a. m. creek boat for Oakland. The lines will be formed at the foot of Broadway, and the clubs will be assigned positions in the line alphabetically. All captains will ride at the head of the line, allowing their lieutenants to see that order is maintained in the ranks.

Unattached wheelmen are cordially invited to attend, and a position will be assigned them in the rear of organized clubs. Those clubs belonging to the association will be assigned positions first, the organized clubs next following. The pace will be set to accord with all in line. The distance is only twenty-five miles each way, and the roads are in excellent condition. A fine lunch has been prepared at the grove, and the charge will be 30 cents for each individual.

The recent loss to the Garden City Cyclers of San Jose of their two racers Clarence Davis and Allan Jones, has occasioned no end of comment among the cycling fraternity.

The Olympic Wheelmen realize that racing men build up a club, hence they never lose an opportunity to increase their ranks with every available man. At present plans are on foot to gather in Jones and Davis, and these, together with the other fast men, will put the club on top in the matter of racing talent. Otto Ziegler Jr. and C. R. Coulter, both of whom belong to this club, will return here next month and Walter Foster, who is their pride gives the Olympics five of the fastest class B min at present.

Captain C. W. Etting has called a run of the Pacific Cycling Club to Halfmoon bay. The start will be from here on the 3:30 train this afternoon. At San Mateo wheels will be resumed and the trip continued. The return will be made to-morrow. This trip was taken by them several weeks ago, and proved so satisfactory that a repetition is in order. A meeting of the Pacific Cycling Club will be held on Monday evening to elect officers. 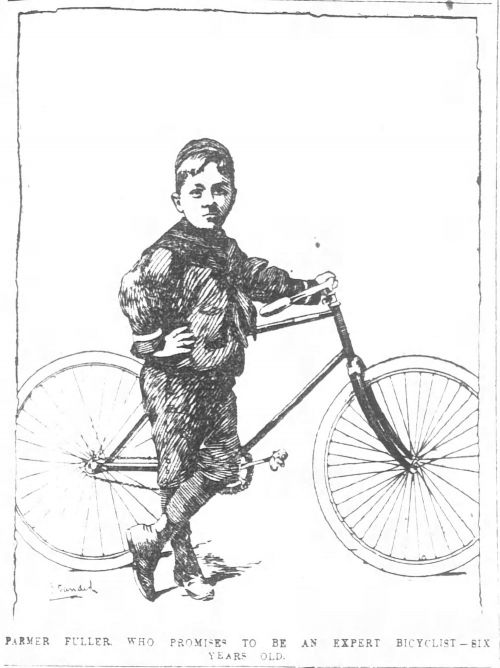 PARMER FULLER WHO PROMISES TO BE AN EXPERT BICYCLIST – SIX YEARS OLD.

Parmer Fuller, who is the six-year-old son of W. P. Fuller of this city, is in a fair way to be a shining light in cycling circles. He has been riding but six months, yet quite easily stays with party when wheeling in Golden Gate Park. His wheel is a full '95 model, made specially order for him.

C. N. Ravlin and Thomas R. Knox have joined the Olympic Club. Both men are prominently connected in league affairs.

The Eschsoholtzia Cycling Club of Marysville enjoys weekly Sunday runs, which are always well attended. The membership now numbers thirty. Secretary F. D. Gordon states that at present the roads in that section of the country are in fair condition, but the hauling of grain will soon put them in bad condition until after the rains.

The Bay City Wheelmen are preparing to astonish the cycling populace by appearing at the League meet on the Fourth of July at San Jose in white duck suits.

Wheelmen who are riding 1 1-4 inch pneumatic tires on the streets in this city should be careful when turning in and out on the cable track, as the space between the car rail and basalt block is fully three inches wide, and unless the rider uses care the rim is liable to catch in this wide space, and a nasty spill is the result.

The good road ride of P. Alexander in the Californias' race Sunday included [sic] the club to increase the medal Alexander is to wear, and he will receive a medal valued at $20, instead of $15 as offered. A competition record is looked upon more favorably than one against time.

F. W. Fuller has returned from an extended trip East.

F. M. Byrne, the Imperials' fast man, who has been riding in the Portland races, is expected home to-morrow, and will immediately go into training for the Fourth of July races at San Jose.

The Outing Road Club has a picnic run to Haywards Park to-morrow leaving on the 8:30 A. M. boat. Each member is expected to provide himself with lunch. Captain Davis and Bert Mayer of this club returned from their Blue lake trip during the week. Captain Davis is now at Bolinas bay for a two weeks' vacation.

Captain J. J. B. Argenti of the Camera Cycling Club announces that upon the invitation of Mrs. A. G. McFarland a club run is called for tomorrow to Camp Alta Vista. Members will assemble at Twenty-first and Valencia streets at 6.30 A. M. Thence along San Bruno road to San Mateo, twenty miles, thence via Pescadero road to Cape Horn, seven miles, passing Crystal Springs dam; thence to destination, where Mrs. Vice-President McFarland will exercise her prerogative as hostess. Return by train or wheel from San Mateo, arriving in town about 6.30 P. M. The run will be confined exclusively to the members of the annex.

The San Francisco Road Club is now occupying its new clubrooms at 722 Golden Gate avenue. This club proposes to hold a five-mile road race in the near future. President E. Sands has donated a gold medal for the member making the fastest time.

A party consisting of Lovier and Wentworth, Redwood City Wheelmen, Olney of the Reliance Wheelmen and Bentley of Sacramento recently made the trip to the Yosemite valley. W. G. Lovier, in a letter, states that the party went in by way of the Coulterville route, as described in a previous issue of the “Chronicle," and found this a much poorer road than that of Big Oak Flat. He advices intending tourists to use no higher gear than 60, he having found 72 to be a decided disadvantage. He was compelled to drag all of the hills.

Accidents were numerous and walking was necessary a great part of the way. Snow was encountered in the valley. The party endeavored to ride from Wawona to Fresno in one day on the return, but a number of accidents delayed them and they finally gave up the attempt at 2 o'clock in the morning. At daybreak they were mortified to learn that Madera was but three miles from their camping ground.

R. J. Elliott and W. A. Searles of the Bay City Wheelmen rode to Pescadero and return last Sunday, a distance of 126 miles. The start was made at 4 A. M., and they arrived back in the city at 10 P. M. the same day.

W. C. Howe, who has been touring a wheel in Victoria, arrived in town during the week.

John W. Hardy of Baltimore left that town on June 1st to make a wheeling trip to this city.

A party, consisting of B. T. Edwards and L. H. Cox and H. H. White and S. G. Scovern, mounted on tandems, will leave this afternoon for a tandem trip to Newark, enjoying the hospitalities of the Etna Shooting Club, and in the morning riding over to enjoy the picnic at Niles.

C. S. Wells and Harry Terrill will start for Los Angeles this afternoon and will represent the Bay City Wheelmen in all the races on June 25th. George P. Wetmore, ex-president of this club, also forms one of the party.

On Sunday, June 30th, the Royal Cycling Club will hold a run to Camp Taylor under command of Lieutenant Sternberg. 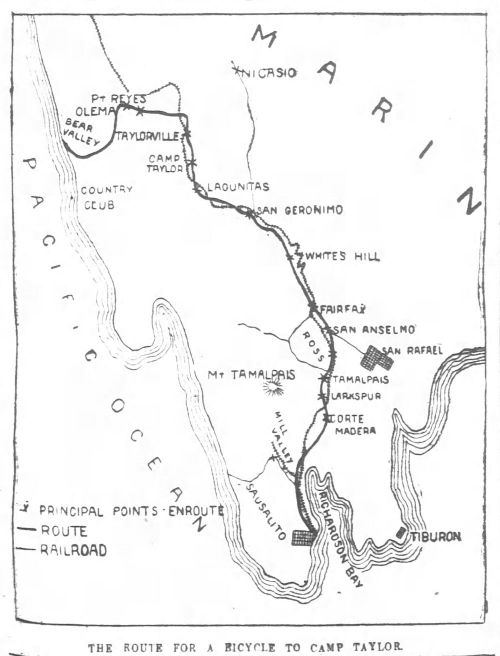 THE ROUTE FOR A BICYCLE TO CAMP TAYLOR.

The Marin side of the bay is perhaps the most popular for touring trips. One very good reason for this is the absence of those terrible strong head winds so prevalent on this side of the bay. A pleasant Sunday trip, and one which is at present receiving much attention from the cycling fraternity who delight in spending a Saturday or Sunday in long country jaunts, is the ride from Sausalito to Camp Taylor and return. This trip has most attractive and varied scenic changes. The route starts prom Richardson's bay and skirts the shore until Alto is reached, a distance of five and one-half miles from Sausalito. Then the route leads over the Corte Madera hill, which is not now such a bugbear to the wheelmen, as the new road lying to the left is much more easy of ascent than the old one.

At San Anselmo the road to the left should be taken. This runs past Fairfax, which leads you in a roundabout way to the foot of White's hill. This hill is the only really disagreeable part of the trip, as it means a walk up and down unless the rider is an expert at back-pedaling, and even then it requires a great deal of coolness when making the descent, owing to the very poor condition of the road. It is much safer to walk down when making the return trip home, owing to the curves on this side of the hill being very short and steep.

After reaching San Geronimo the road lies to the left, and about one mile from there one enters a grand forest. A babbling brook runs along the roadway until Camp Taylor is reached.

The ride from the Tank, or Lagunitas, as it is called, is somewhat rolling, but the roads are at their best and the drooping tree branches which hang over the path, add much charm to the scenery. At one point on this road, just between San Geronimo and the first railroad crossing, is Echo canyon. Old-time cyclers never pass this spot without giving a rousing war-whoop and listening to it re-echo many times. Just three and one-quarter miles from Camp Taylor lies Tocaloma, and the ride there leads you past the paper mill and creek, with its large dam. A cycler visiting Camp Taylor should make it a point to ride up to the old mill.

If one desires to extend the trip, the roadway will lead you to Point Reyes, where the Country Club has a sportsmen's paradise in the way of a shooting preserve. This would bring you to Drake's bay, but is a trip very seldom taken, because of its hardships and lack of facilities in case of an accident to wheel or man.

The principal points passed, with distances as measured by the cyclometer, are as follows:

The ride to Sausalito and return would amount to fifty-five miles, but the majority take the train one way at San Anselmo, which cuts off about twelve miles. 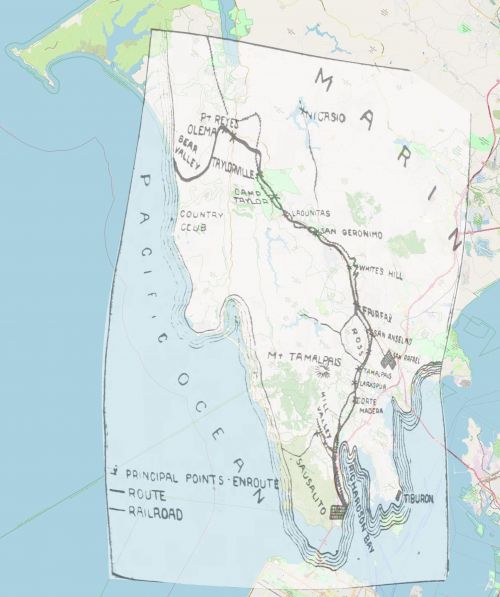 THE ROUTE FOR A BICYCLE TO CAMP TAYLOR.
Georeferenced with QGIS
Retrieved from "http://wooljersey.com/index.php?title=AMONG_THE_WHEELMEN_-_San_Francisco_Chronicle,_22_Jun_1895&oldid=2826"
Categories: