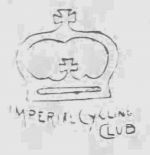 The Imperial Cycling Club and Liberty Cycling Club of this city made applications to join the association. They were referred to the interclub relation committee and received their approval. The amendment to the by-laws making it impossible for a member expelled from one club to join any other club of the association without first obtaining the consent of the club from which he had been expelled was declared null and void.

During the afternoon Louis Deloy of the Imperial Cycling Club of San Francisco had a narrow escape from drowning. He was in swimming with a party of wheelmen, when he was taken with cramps and sank to the bottom. Supposing he was swimming under water no notice was at first paid to him, but when the true cause of his disappearance was realized, C. T. Dodge, [Should be T. C. Dodge - MF] captain of the Bay City Wheelmen, who was also in bathing, dived to the bottom and brought Deloy to the surface. With considerable difficulty the was brought to shore, where It took almost ten minutes to revive him.