Return of the Champion, Zeigler.

Additional Coast Racers in Class B.

The annual meeting of the members of the Bay City Wheelmen will be held in the clubrooms, 44 Golden Gate avenue, to-night, for the purpose of electing a nominating committee, who in turn shall nominate the officers' ticket for the ensuing year. All officers will read their annual reports, including a report of the present financial standing of the club. The election of officers will take the usual course, they being balloted for by the mail ballot about ten days later.

Wilbur Edwards was tendered a banquet last Sunday by the Garden City Cyclers as an expression of their kindly feelings for their plucky rider.

The San Jose Road Club will hold its next five-mile race on Sunday, September 5th, being the second race of the series. Walter Hawkes of the Olympic made a run to San Pablo last Sunday amidst all the heat, and reports the roads very much cut up and covered by a foot of dust.

The Reliance Wheelmen's track at Alameda is now undergoing extensive alterations in the way of comforts for the spectators. The track is being resurfaced with clay. The cement which has heretofore been used is being torn up and discarded for the newer and better material. It will be ready for use in about two weeks, plenty of time in advance of the race meet to be held there September 15th, so that the boys will have s chance to train.

W. L Elliott and wife have started on a touring trip awheel up into the Livermore mountains. Mrs. Elliott is one of the first ladies of Oakland to don the bloomer costume for cycle-riding. The many long trips taken awheel without the usual amount of exhaustion speaks well for this lady's riding abilities, materially helped by the easy costume assumed. They expect to be gone about ten days, taking in all the many country towns on the road, with a view to settling in one at some future date. They both ride twenty-pound wheels and carry on the handlebar the usual necessities for stopping over night. Mr. Elliott is an active member of the Reliance Wheelmen. 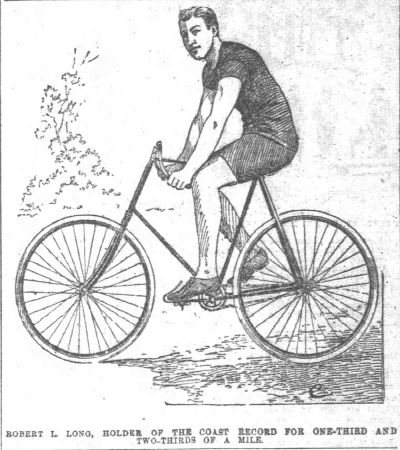 The California Cycling Club will hold a ten-mile handicap road race on September 30th, and the course will probably be over the straightaway. This club will go to Centerville to-morrow under command of Captain W. N. Brunt. They will have a scorch from High street, Alameda, to Haywards, with a view to ascertaining about what handicaps should be given in their road race. Arriving at Haywards. they will await the rest of the riders and proceed to their destination for dinner. They were presented with a beautiful silver bugle, by, one of their members who had just returned from the Denver meet, where this bugle was used. Owing to a change in the date on which Labor day is to be observed this year, the Olympic wheelmen contemplate abandoning the race meet to be held on October 2d, but will probably select some holiday during November or December, as they intend to give a meet before the year is over.

Otto Zeigler Jr., amateur champion of the United States, does not intend to race at the September 10th meet, and reports that he will do no more racing until the opening of the new track of the San Jose Road Club.

Walter Foster may enter in these races, but has not fully decided what to do.

Charley Wells is now in Yellowstone Park with T. H. B. Varney and may reach here sometime next week. No definite reply can be had from him as to whether he will enter these races or not.

Griffiths, Martin, Goddard and Rosburg, all Bay City Wheelmen, rode to San Leandro on Sunday to watch the Hancock brothers on a tandem endeavor to establish a tandem road record. Owing to the intense heat the trial was abandoned.

A proposed excursion on the bay on one of the ferry steamers is now on the tapis, and will do much toward helping the club members becoming better acquainted, as the scheme is to have it a joint affair, participated in by all the local clubs.

H. F. Wynne, who is attending to the transportation of the associated clubs, reports that the peanut train will leave San Jose on Monday night, September 10th, at 5:35 P. M., returning via Niles. The next train leaves at 10 P. M. by way of San Mateo, and the railroad officials state that this train will not stop at Valencia street for the cyclers to unload their wheels. They request all wheelmen to wait until the train reaches Fourth and Townsend streets before asking for their wheels.

H. B. Williams, P. A. Kilby and J. H. Grady have been elected to membership in the California Cycling Club, Mr. Grady will be remembered as the past grand president of the Native Sons of the Golden West.

Messrs. Battles, Nutter, Kanzee and Bent considered it too warm last Sunday for a run in the country, so were satisfied with a spin to the beach.

Elmer Roach, first lieutenant of the Bay Citys, is in active training for the races.

H. A. Raymond, chairman of the racing board of League of American Wheelmen, under date of August 23d places the following additional Pacific Coast racers in class B, and warns all amateurs of class A not to compete with them in future:

The Pacific Cycling Club, under Captain C. W. Etting, held a ran to the Park, Cliff and over to Ingleside last Sunday, returning by way of old Mission road. The roads were found very dusty and much cut up.

The wheelmen of Dixon, Cal., are considering the advisability of holding a race meet some time this fall providing suitable arrangements can be made by which they can secure the use of the horsemen's track.

George Nissen, the Bay City racer, has announced his intention of retiring from the track this season, owing to his inability to find time to train for the races.

The class A events of the Garden City Cyclers will contain Messrs. Albergeria, Hamlin, Hoaglan and Upson of the Capital City Wheelmen, also Syd Vincent of the Bay Citys. They are all popular and fast riders.

A party of wheelmen from the Pacific Cycling Club intend riding to Monterey on September 8th, returning on the 10th in time to view the wheelmen's parade at San Jose.

The Bay City Wheelmen will enter Messrs. Harry and Will Terrill, Tom Hall, Bert Menne and W. Caldwell for the San Jose races, and they are training hard every day.

The San Jose Road Club is only waiting the arrival of its champion, Otto Zeigler, Jr., when preparations will be made to lay the corner-stone of their new clubhouse. Otto will officiate as master of ceremonies on this occasion, and if he does it as successfully as he rides a wheel it will undoubtedly be an affair wall worth seeing.

The California Cycling Club is now conferring with the San Jose Road Club whereby these two clubs can hold a joint picnic on Sunday, September 9th, at [Taudt's Ranch], in the Santa Cruz mountains, instead of attending the associated clubs' picnic.

The Olympic Club Wheelmen at their last meeting voted to attend the associated clubs parade at San Jose on September 10th in tbe same-style costume as they wore last year, which enabled them to win the prize. The uniform is as follows: Blue cap with emblem, white sweater with emblem, blue bloomers, black stockings and shoes. It is compulsory that each member be clothed in this costume, otherwise he will not be allowed in the line of parade. They also decided to allow those racers so inclined a certain amount per week so that they can go down to San Jose and train on the Garden Citys' track, there being no available track nearer at hand.

The Columbia Bicycle Club will journey to San Jose on September 9th, and will I attend the parade in a body.

Otto Zeigler Jr. and Walter Foster have arrived, and were welcomed back by numerous cyclers, who were on the alert for their return. Zeigler was accompanied by his father, who was with him in Denver and on the circuit during the races.