G. A. Nissen, the Alameda boy who made such a good showing in the recent bicycle races at Cycle Park is now looking for broader fields. He is preparing to go to the World's Fair, and will make the trip on his bicycle. 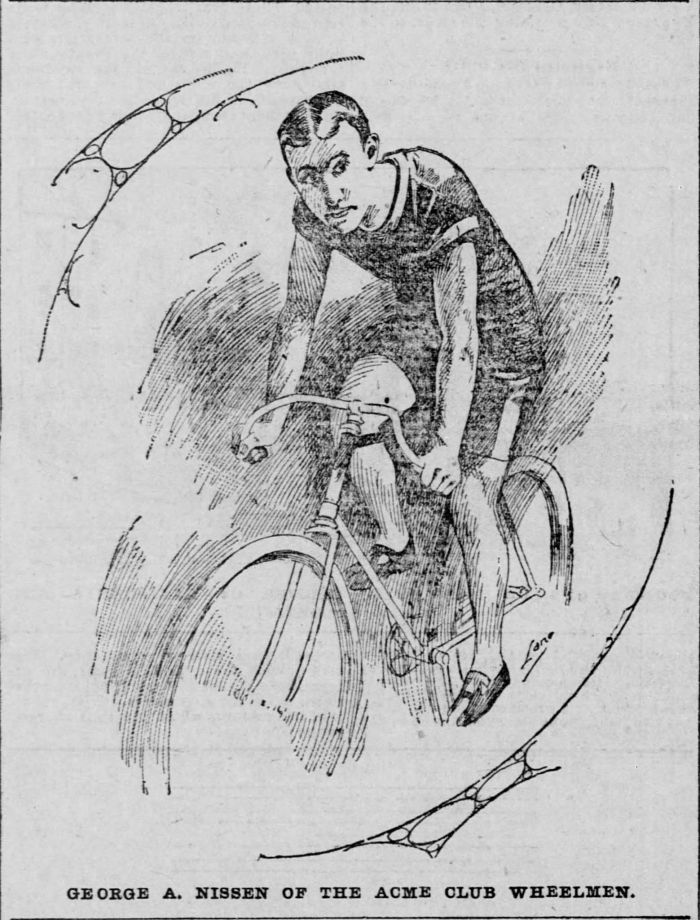 GEORGE A. NISSEN OF THE ACME CLUB WHEELMEN.
THE WHEELMEN. - The San Francisco Call, 20 Jul 1895 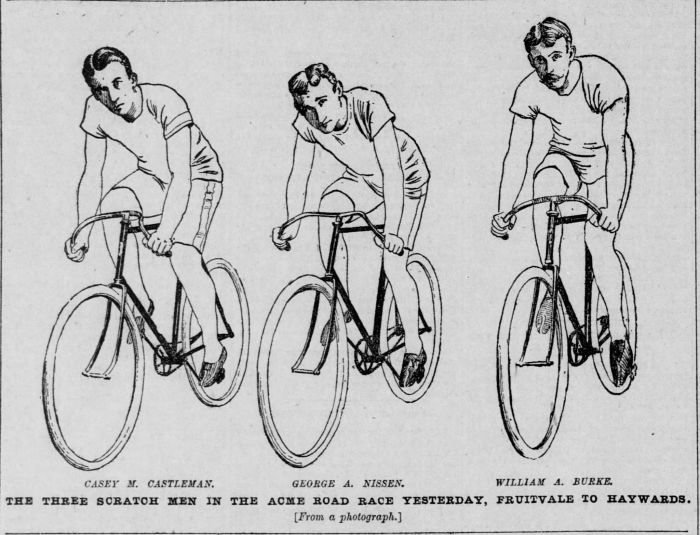 CASEY M. CASTLEMAN. GEORGE A. NISSEN. WILLIAM A. BURKE
THE THREE SCRATCH MEN IN THE ACME ROAD RACE YESTERDAY, FRUITVALE TO HAYWARDS.
[From a photograph.]
TEN MILE RECORD BROKEN - George A. Nissen Did It in the Acme Club Wheelmen's Road Race. - The San Francisco Call, 29 Jul 1895

G. A. Nissen, a local wheelman, who has gained some prominence as a record-breaker, has been suspended from the Diamond Club Cyclers. His attitude toward the club of late has not been very pleasant and the rupture was not unexpected. Nissen is also a member of the Acme Club of Oakland, under whose colors he rode in the ten-mile road race from Fruityale to Haywards last Sunday. He had been asked previously to ride under the colors of the Diamond Club and his reply was not couched in elegant diction. The Diamond Club held a meeting to investigate the matter last night, which resulted in Nissen's suspension.

Nissen Not a Diamond.

Will Ride a Five Mile Race With R. A. Meserole.

There is likely to be a hot race between two popular local cyclers in June, as the following challenge, handed in by George A. Nissen, will evince:

ALAMEDA, May 25, 1897. Being aware of the fact that Mr. Richard A. Meserole, Captain of the Alameda Cyclers, is anxious to obtain a match race with me, I hereby challenge him to ride me a five-mile race over the San Leandro and Haywards course, Sunday, June 6, 1897, at 2:30 P. M., for a purse of $50 or more. Now, then, Mr. Meserole, come along. I will ride a Racycle geared to 105, fitted with Palmer tires. Hoping you will accept this challenge I am yours,

G. A. Nissen left here last evening on the Oregon express for Seattle, Washington. He will there board the steamer Cleveland, which left San Francisco a few days ago, and proceed with her to Dawson City in the Klondyke.

Mr. Nissen goes in the interest of a shipping company of San Francisco and will establish a trading post at Dawson. The name of the shipping company is not known. The young man was employed with Taylor & Sons, the manufacturers of San Fran- cisco, but it is understood he will not go in their interest.

G. A. Nissen is well known as a cyclist and at one time had quite a track record. His parents lived on Santa Clara avenue.

Last Saturday George Nissen, the popular cycler, rode a half mile in 1.034-5 min., breaking the worlds record. He rode on Clement avenue, and Fred White had been his trainer.

Last week's reminiscences, born out of scrap-book gazing, have apparently ignited the fires of memory for other oldsters, judging from the responses, so I am moved this week to continue for a bit. I wonder how many remember the athletic exhibition given at the Macdonough Theater by the members of the Acme Athletic Club on the night of December 9? Bicycling was in its heyday then, and D. Van Court was in charge of the show, the tour de force of which was a treadmill race between G. A. Nissen and Pete LeFevre, a measured distance from Redwood Canyon to the Acme Club, a distance of two miles. Bicycles were for sale everywhere then. George A. Faulkner, whose shop was at I2th and Webster, was urging all, in an advertisement, to wait for "our '96 tandem Rambler - it will be a beauty." You could get a Syracuse bicycle at 107 San Pablo Avenue; a Cleveland or a Crescent from Leavitt and Bill at 1112 Broadway; a World from the agency at 74 San Pablo Avenue; a Tribune from the Central Cyclery at 426 14th Street; a Stearns, described as "the Yellow Fellow," from C. L. Maxwell & Sons at 481 14th Street; a Marsh '96 from Charles B. Shear at 480 10th Street; a Lu-mi-num, all machines tested to 2000 pounds, at 24 San Pablo Avenue; and a '96 Lovell Diamond from C. A. Salomonson at 399 12th Street. Mr. Salomonson admitted that it was a "world beater," but in the event you didn't care to ride, he urged you to see his "bargains in the line of watches and jewelry." That seemed fair enough, since the Saddle Rock was close by at 463 12th; and it was only a step further to the establishment of E. Hook, where you could buy, of all things, carpets. Bicycling was the rage, and the votaries included De Wolf and Edna Wallace Hopper, who were playing "Wang" at the time in the bay area.