Bicycle Races in Various Parts of the State. 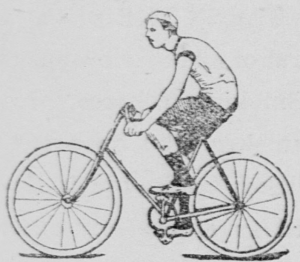 The two-mile safety race for the Pacific Coast championship, held by G. H. Osen, of the Garden City Cyclers, was won by W. F. Foster of the Alameda Bicycle and Athletic Club, Osen coming in a good second. B. C. Lund of the Acmes had very little trouble in winning the one-mile ordinary handicap in 2:51 3-5, the second man being H. C. Smith of the Garden Citys.

The next number on the programme was an exhibition of trick riding on a safety by James Ordway. This was one of the most interesting events of the day. After propelling the machine in every possible way and by many apparently impossible methods, he lifted the front wheel off the ground and rode around the track — a quarter of a mile, raised turns and all — on the hind wheel alone. Some of the Eastern experts might find it profitable to practice this exercise in balancing, which our California boy thinks is great fun.

Then came what was really the event of the day, the one-mile safety handicap, In this all the best riders were entered, and the record was badly knocked out in the second round by Walter Foster on his racquet-frame Victor. Grant Bell, who rode the fine Swift which he won in the May races, took the first heat in 2:45 2-5, G. A. Falkner being second. Foster almost had a walkover in the next heat, his time being 2:36 2-5, with Van Wyck a poor second. This cut the coast record down nearly six seconds, and a still greater reduction would doubtless have been made had the Alameda youth been pushed.

George Osen, San Jose's big boy, won the third heat with ease, in 2:37 1-5, F. Kenna of the Alameda County Wheelmen being a far-away second. The fourth heat was a walkover for W. J. Edwards of the Palo Alto Wheelmen, none of the other men entered caring to compete with the diminutive Hercules. However, he went over the course and, with E. Maillot as a pacemaker, attempted to beat the half-mile record. In this he did not succeed, his time being 1:17 1-5. Then he slowed down and finished the mile in 2:52 1-5.

The final heat of this race was extremely exciting. Bell, Foster, Osen and Edwards started from scratch, their first object being to overtake Van Wyck, who had a 75-yard handicap. This they soon succeeded in doing, and then the battle of the giants began in earnest. Each led by turns until the last lap, when Osen got to the front and on the lower turn led Foster, who seemed to be in a pocket, by 20 feet. Then the Alameda champion let out a link and showed how he could ride when he felt that way. It was only a short distance to the lane, but the way he overhauled Osen was a caution. He gained with every push of the pedal and in a moment was lapping the San Jose giant's hind wheel. Ten yards more and Osen would not have been in it, but there was not that distance to go, and the pride of the Garden Citys crossed the line two feet ahead of the Alameda boy. Edwards was third and Bell fourth. Van Wyck dropped out of sight somewhere near the clubhouse. The time was 2:37 3-5.

Then Charles Yates of the Olympic Club ran away from his field in the 440-yard open dash, making the distance in 56 seconds.

Last of all, but by no means least interesting, was the five-mile safety scratch race. The starters were: Osen, Edwards, Bell and Scleuter, the latter making the pace, and a snail-like pace at that, for about four miles. The others were riding in a bunch at their ease. On the fifth mile they all limbered up a bit, and when the last half-mile was begun Bell made one of his phenomenal spurts, quickly moving up from last place to the front. But he made his final effort a little too soon. Big George Osen didn't want to follow anybody's procession, so he just shook a few flies off his broad shoulders and began to pedal as though he had a license to do nothing else. Then Edwards of Palo Alto breathed a prayer to his alma mater and moved up as though he wished to whisper a word in Osen's ear. Both passed Bell, and Osen may consider himself lucky that he got to the finish before Edwards was quite close enough to reveal his secret, otherwise he might have reflected less glory on the Garden City cyclers. The time was 16:32 2-5, not fast, but, as Captain Ravlin said, it was enough glory for San Jose to win the two chief events of the day without minding a few seconds more or less. Nevertheless, Walter Foster is happy, for he still holds the time championship for the Pacific Coast.

The lantern parade in the evening was a complete success, and the day's festivities closed with a reception to the visiting wheelmen in the pavilion in the club grounds.

Some Good Time Made in the Bicycle Races on the Stockton Track.

Stockton, July 4th - The race meeting of the California division of the League of American Wheelmen to-day was largely attended and the contests were exciting. The racers were of the Bay City Wheelmen, Capitol City Wheelmen, Garden City Cyclers, Oriental Cycling Club and Oak Leaf Wheelmen of this city. Chief Consul Arthur H. Wright was referee, Sanford Plummer was starter, and A. J. Storey, G. P. Wetmore and F. A. Eckstrom judges. The timers were Edwin Mohrig, D. T. Creanor and C. F. Hutchinson. The first race was the one-mile safety novice, with eight starters. C. K. Melrose of the Bay City Wheelmen won the race in 2 minutes 44 4-5 seconds, W. H. Toepke of the same club being second.

The next was a one-mile ordinary race for the State championship, with four starters. L. S. Upson of the Capitol City Wheelmen won the race in 2 minutes 49 1-5 seconds, David Marshall of the Bay Citys being second.

The next event was a hot race. It was a one-half mile safety scratch with nine starters. A special gold medal worth $25 was offered by the Electric Railway Company if the record was broken and it was broken by three riders. W. W. Needham of the Garden City Wheelmen came in first in 1 min. 15 4-5 sec, beating the record by 3 seconds. L. S. Upson of Sacramento was second, also beating the time in 1 min. 17 4-5 sec. Al Alcayaga of Oriental Cycling Club also beat the record, coming in third.

The fifth race, half mile, ordinary, scratch, was contested by Marshall and Doane of the Bay Citys, Upson of Sacramento and Desimone of San Jose. The California division offered a special trophy, valued at $24 if its record of 1 minute and 22 1/2 seconds was broken. L. S. Upson won the first and the special prize in 1 minute and 18 1-5 seconds, Marshall winning second prize.

The last race was five miles, safety, for the State championship, which had nine starters. Al Alcayaga of the Oriental Cycling Club won the race in 14 min. 41 sec., T. R. Lillie of the Oak Leafs of Stockton second and C. L. Davis of the Garden Citys third.

Los Angeles, July 4. — In the bicycle road race from this city to Santa Monica to-day, the gold medal was won by Frank J. Waller Frank Waller of the Acme Club of Oakland. He covered the distance, 18 1/4 miles, in 1 hour 2 minutes 28 seconds. Cromwell of Los Angeles was second, in 1 hour 2 minutes 37 2-5 seconds.