CHAT ABOUT THE CYCLE. - Growth of the Alameda Bicycle and Athletic Club. - Century Run of the Orientals - A New Club. - End of the Thousand-Mile Relay Race. - The San Francisco Call, May 23, 1892

Growth of the Alameda Bicycle and Athletic Club.

Century Run of the Orientals - A New Club. - End of the Thousand-Mile Relay Race.

It would be hard to find, even in California, a prettier town or 3 more enterprising community than Alameda. With its freedom from the winds which almost daily sweep this peninsula and its 30 odd miles of smoothly macadamized streets and connecting roads, almost equally good, what is more natural than that its people should take to the wheel as ducks do to water? This is the cyclist's paradise, where children ride to school on safeties, and letter-carriers and policemen make their rounds astride the silent steed. And here, where the weary find no cobbles and hill-climbing is unknown, is located the headquarters of the Alameda Bicycle and Athletic Club, one of the most vigorous organizations of the kind in the whole country. 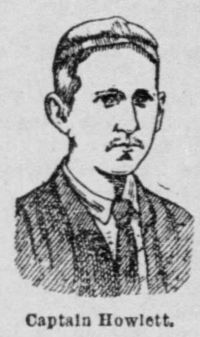 In January, 1890, J. F. Ives and Fred T. White conceived the idea of organizing a bicycle club and associated with them Harry Potter, John Moisant, Bert Burrel, Frank Howlett and H. R. Williams Jr. Mr. White was elected president and Jesse Ives captain. The club was active from the start. On July 4, 1890, Jesse Ives won the one-mile safety championship of the Pacific Coast at the race meet at San Jose.

On May 30, 1891, the club held a 25-mile road race over the San Leandro triangle, in which entered two men from the club - J. F. Ives and Walter F. Foster. Foster won the race, coming in first against 18 entries and winning the gold medal. Jesse Ives made an excellent showing. At Stockton, July 4. 1891, the club had entered in the league races Walter F. Foster, who captured second prize in the championship, and at the Acme Club races both men took first and second places.

It soon became apparent that the club, on account of its rapidly increasing membership, would have to seek other quarters, and it was suggested by Messrs. White and Foster that a lease of the Schuetzen Club grounds be procured, and, the suggestion being good, a committee was immediately appointed to take the necessary steps to get a lease, and on May 30, two years from the time of its organization, the club will be in a position to invite all wheelmen on the Pacific Coast to inspect and race on the finest bicycle track in California. The surveying of the track was under the supervision of Mr. Poyser, City Engineer of Alameda, The grading was done by Mr. Schumacher, contractor. The supervision of the top dressing was in the hands of Mr. Bailey of the California Improvement Company, whose work has been well and conscientiously done. The track is four laps to the mile, 30 feet wide all round, and banked six feet high at the turns. It promises to be very fast.

A grand stand capable of seating 2000 persons has been erected. The old pavilion has been placed in first-class condition, and will be used for a gymnasium and dancing hall. The keeper's lodge has been converted into a clubhouse, provided with a billiard-table, dressing-rooms and all the accessories of similar establishments. The grounds, in which the club has a five years' lease, comprise seven acres, fronting on the bay shore and containing many old oak trees and graceful pines. Inside the big track a cinder path for footraces will be laid out, a lawn-tennis court will be provided, and in the shady nooks seats and tables for al fresco lunches may soon be found. Many of the leading citizens of Alameda County belong to the club, which now has 150 active members, not including the ladies' annex, which has 44 names enrolled. The present officers are as follows: J. F. Ives, president; W. F. Foster, vice-president; H. R. Williams Jr., secretary; T. Vincent, treasurer; F. Howlett, captain; C. Conkey, first lieutenant; F. C. Cowles, second lieutenant: F. G. White, bugler.

Walter Foster had a bad fall the other day, which will interfere somewhat with his work, but he hopes to be in good form by the 30th.

Yesterday the Oriental Cycling Club held a century ran to San Jose and return on this side of the bay. The riders started from Twenty-second and Mission streets, and finished at Twenty-second and Folsom streets. The first to arrive at San Jose was Captain L. A. Vidy, four hours and a half after the start. After an hour's rest for lunch, the members started back, Captain L. A. Vidy again arriving first at the finish, four hours and a half after the time of starting, which is believed to be a new record, Captain Vidy's time being 9 hours and 54 minutes. Ten of the Orientals started, and all finished, although a couple of accidents to wheels were reported. The record was also broken by F. C. Hansen, who came in second. Wade de Guerre, one of the club members who started at Redwood City to pace the leaders, dropped off at the first convenient haystack. Those who made the run were Joseph Porter, Charles Cornell, G. J. Becker, Harry Dilges, Charles H. McLane, Joseph G. Lerdens, M. A. Griffith, F. C. Hansen, L. A. Vidy and D. P. Dolan.

A number of members of the San Francisco Bicycle Club, accompanied by ladies, made a run yesterday through the park to the cliff and the Presidio.

A party of San Francisco men, including Dr. J. C. Spencer, Dr. J. C. Massey, L. D. Owens, Eugene Meyer, T. S. Cobden and L. H. Cox, propose starting on next Saturday for a trip to Mount Hamilton, returning to the city on Monday. This run may be postponed, however, as other members of the club talk of a run to Santa Cruz on the same day, and no conflict of interests is desired.

The Bay Citys had an enjoyable run to Petaluma yesterday. The weather was delightful, and a jolly good time was experienced by all.

Last Thursday evening a number of gentlemen living at the Mission and interested in cycling met for the purpose of organizing a club. H. F. Wynne acted as temporary chairman and T. C. Connell as temporary secretary. The title of the organization will be California Cycling Club, and the rooms at the corner of Twenty-second and Folsom streets, formerly occupied by the Kensington Club, have been secured as a clubhouse, where the next meeting will be held on Thursday at 8 P. M.

Edward Winfield, an attache of a morning paper, made the round trip from the Stanyan-street entrance of the park to the ocean beach yesterday morning in 40 minutes.

S. R. Church has ordered a Rover enameled red all over. It is likely to create a sensation along country roads where cattle congregate.

A. W. Barr, a transcontinental rider, will leave on Wednesday for New York via Panama. He is an expert rider, though his country run of April 26 in 9:40, accompanied by A. A. Bullion, and done in full suit, including collar and cuffs, is his only notable performance on this coast.

While talking about pneumatic tires and their liability to puncture with W. M. Hunt, the bicycle machinist of Alameda, the other day, he smiled and, producing a 10-penny nail, drove it through the front tire of a pneumatic he had just received, saying he had already done this a dozen times. The nail was drawn out but no air escaped, and the wheel was then ridden several miles by a surprised newspaper man.

A new bicycle company has been organized at Portland, Me., with C. M. Raymond as president. Mr. Raymond is well known in this city, and his many friends will wish him every success in his new venture. He is a famous inventor, and a gentleman of integrity and rare business ability.

The New York Wheel scores the California organ of the L. A. W. for indulging in vulgar language. The rebuke is well deserved.

The cyclery at the entrance of the park has been doubled in size. Mr. Devany anticipates a boom this summer.