Edwards willing to Try for the World's Record To-Morrow.

The parade of wheelmen last Wednesday night was about the largest gathering of the kind ever brought together in this city. As a rule cyclists are averse to parading, but where the cause is their own, as in this instance, they turn out en masse, and the effect of several hundred wheels in line is very pleasing. There was some comment because the Bay City Wheelmen did not appear in the turn-out. This club should have been well represented, whereas there were but three members in line. In such a movement, where the direct benefit of themselves and all other cyclists is concerned, it seems to me that the oldest and one of the largest local clubs should have made some effort for the good of the cause, and surely it would have been no hardship for them to have turned out in a body and paraded with the other clubs for an hour or so.

There is dissention in the ranks of the Imperial Cycling Club and several of the charter members have resigned. Still the club is strong numerically and the loss of a few members should not affect it. Captain Johnson has called a run for tomorrow to Niles Canyon, leaving on the 9 A. M. broad-gauge boat. A special meeting of the members will be held next Tuesday evening. President Tooker has appointed the following committees: Delegates to the Track Association - J. S. Egan, E. C. Douglas and J. F. Burns; to the Associated Clubs - C. H. Dannals, W. W. Wilson and W. W. Earle. The Imperials will have about ten men entered in the Bay City Wheelmen's races.

The California Cycling Club will hold the third of a series of one mile handicap Club races at Central Park to-morrow morning. Two weeks from to-morrow the winners of the three races will ride the final, and the victor will be rewarded with a medal.

There will be a road race to-morrow from San Jose to Gilroy (thirty miles) between teams from four prominent business houses there. The first rider to arrive in Gilroy scores 20 points, the second 19, and so on, the last rider scoring one point. The make-up of the teams is as follows: From T. W. Hobson & Co. - H. P. Peoples, Charles George, W. A. Rogers, Ed Williston and J. W. McCauly; from the City Store - D. G. Thornton, A. M. Turel, R. W. Katy, Thomas Welch and Al G. Col; from A. L. Brassy Co. - A. Brassy, R. Brassy. A. E. Johnstone, Joseph Jury and E. Reynaud: from T. W. Spring & Sons - A. Pedemunte, F. Chararia, W. K. Jamison, E. P. Meyer and Charles J. Sullivan. The officials will be: Referee, J. A. Desimone; starter, G. A. Howes; judges - H. M. N. Spring, E. Turel, P. E. Col and W. Hobson. The start will be made from the corner of Market and Santa Clara streets at 8:45 A. M., finishing at the Williams Hotel, Gilroy. The teams are very evenly matched and a good race should result.

Although the Royal Cycling Club was organized out of the Crescent Road Club the latter organization has not gone out of existence and is progressing finely at the old clubrooms, 811 Octavia street. New members are being admitted at every meeting and the club is far from being defunct. All communications for the Crescents should be addressed to L. Bearwald, secretary, at the foregoing address.

Captain Quadt has called a run of the Golden Gate Cycling Club to Crystal Springs and return for to-morrow. The club is interested in the present movement for better streets and roads and will lend all the aid in its power.

As already published in the CALL, the Camera Club Cyclists go to Tocaloma to-morrow on the 8 A. M. Sausalito, and the Olympic Club Wheelmen to San Mateo to witness J. E. Edwards' attempt to lower the world's five-mile road record.

Captain L. L. Korn of the San Francisco Road Club announces a run to-morrow to Petaluma, taking the 8 A. M. Tiburon ferry. Members will assemble at Seventh and Market streets promptly at 7:30. This is a new and active club, of which Ed Sands is the president.

The Outing Road Club will attend the Liberty Cycling Club's picnic to-morrow at Tamalpais. All wheelmen are cordially invited to attend this affair, which promises to be a most enjoyable event. Take 9 A. M. Sausalito ferry and train to Tamalpais. No wheels need be taken on this trip, unless some of the cyclers wish to ride back in the afternoon. The committee in charge consists of Warren Irelan, Joseph McLaughlin, A. Joost, Charles Mayer and H. E. Morton.

The Outings made a fine appearance in the parade last Wednesday night, turning out a large percentage of their membership. Captain Mayer has called a century run of the Liberty Club for Sunday, June 2.

Captains Dodge and Kitchen of the Bay Citys and Acmes, respectively, are arranging a joint picnic run for June 2, to some place in Marin County.

There will be an interesting road race tomorrow morning at 10 o'clock over the San Leandro triangle, the contestants being employes of four downtown wholesale houses. The teams are as follows:

Tillman & Bendel entered a team at first, but withdrew to attend the picnic of the Retail Grocers.

The distance of the race has not yet been fully decided upon, but it will probably be for twenty-five miles, being three times around the triangle. Much enthusiasm is manifested in the event among the houses represented, and as one recognizes in the entries the names of several riders who are prominent in racing circles no doubt the affair will furnish good sport.

J. J. B. Argenti, W. R. Phillips and Walter N. Brunt of the California Cycling Club took a long trip last Saturday. They left here at 6 A. M. and rode to Mountain View, thirty miles, without a dismount. Then continued on to San Jose, where they had lunch, afterward resuming their journey, arriving in the evening at Gilroy, having traveled thus far eighty miles. Not satisfied they started on the long and tedious climb up to the Hot Springs, fifteen miles further, which point they reached at 7 P. M., making nearly 100 miles in thirteen hours.

The Gem City Cyclers is the name of a new club now being organized by the wheelmen of Los Gatos.

J. E. Alexander of San Jose contemplates a trip to the Yosemite Valley about June 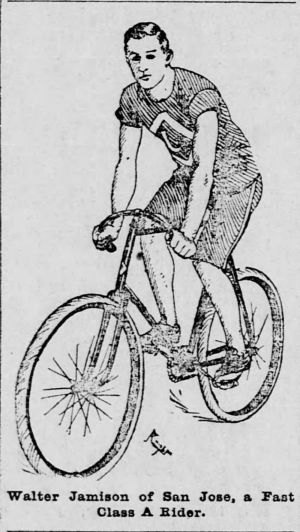 Walter Jamison of San Jose, a Fast Class A Rider.

1, accompanied by Mr. Winship of Stanford. Edwin Mohrig, wife and two children, will ride their wheels from here to Paso Robles about June 15. At the same time W. H. Stinson and James Coffroth of the Olympic Club and Joseph B. Carey of San Jose will start on a trip from here to Los Angeles.

Horace B. Sperry was in the City last week, but left Tuesday for Fresno. He carries his wheel wherever he goes, and rides all the time.

The proposed race to-day over the triangle, between teams from Oakland, San Jose and San Francisco Boy's High schools, has been indefinitely postponed. The team from this City first withdrew, as they could not train, having to take examinations for Berkeley and Stanford. And now the San Jose team has withdrawn, as they think the Oaklanders altogether too speedy for them. The Oakland team consisted of Messrs. Gooch, Childs, Mahoney, Baker, Orra and Colby, all speedy young riders.

Entries for the race meet of the San Jose Road Club on June 1 will close to-night with the last delivery of mail at San Jose. A large list is expected and valuable prizes have been offered in the various events.

Captain Delmas has called a run to Gilroy to-morrow to witness the finish of the business-houses' race. The run is divided 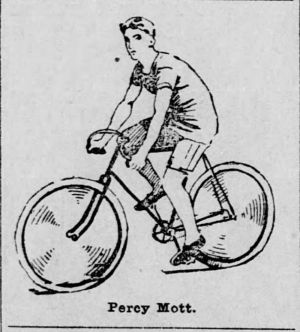 into two sections, the first of which will ride leisurely to destination, while the second will be a scorch, led by two tandem teams in an endeavor to lower the San Jose-Gilroy record of 1 hour 30 minutes. Impromptu races will be held on the Gilroy track Sunday afternoon.

The intermediate dates will be added from time to time if sanctions are applied for early; the circuit may go from Utah to Washington and Oregon before reaching California if arrangements can be made, in which event it would reach here about the middle of November. It is to be hoped that Oakland, Sacramento, Stockton, Marysville, Dixon, Redding, Fresno, Bakersfield and other live wheeling towns in this State will apply for dates on the National racing circuit, thus making more of an inducement for the racers to come here.

I present this week likenesses of Percy R. Mott and Walter Jamison. Mott is a new luminary in the cycling sky, but his few performances have been brilliant and his future as a racer is bright. In build, manner and countenance he much resembles Julian Pye Bliss, the great Chicago racer. He rides for the Acme Club Wheelmen of Oakland, and added to the club's great list of victories at the Fabiola fete in Oakland, May 11, by winning the one-mile handicap, class A.

Walter Jamison is another new rider and hails from San Jose. From a large field of starters he won the mile novice at the Garden City Cyclers' meet on April 19, which was a good performance. He will ride at the Bay City meet on May 30, and should show up well in class A handicap events.

The Garden City Cyclers and San Jose Road Club have both called runs to this City on Decoration day to attend the Bay City Wheelmen's races. An attempt will be made on the world's class A competition record in the mile scratch event at the road club's meet. Tandem pacing will be used. The California Associated Cycling Clubs I will hold a regular meeting next Saturday night at the rooms of the Reliance Club Wheelmen in Oakland. All delegates are requested to be present. There is a "joker" in one of the amendments to the by-laws offered at the last meeting which will be sprung on the unsuspecting delegates, I am told.

The Southern California racing circuit has turned out a grand fizzle, owing to the mismanagement of Charles Fuller Gates, and the class B racers who went down from here have returned. Walter Foster of the Olympics, Allan Jones of the Garden Citys and Burke and Castleman of Los Angeles have entered in the Bay City Wheelmen's races. The latter two intended to ride at Los Angeles on May 30, but say the track is dangerous, so they are coming here.

The Acme Club Wheelmen of Oakland will have a run to-morrow in conjunction with the trampers' annex of the athletic club to Lake Chabot, where a picnic lunch will be served, and then they will have a scorch home over the hills.

The Bay City Wheelmen's race meet at Central Park on May 30, Decoration day, promises to be the most successful event of its kind ever held in this City. No pains have been spared to make it so, and the club is deserving of success. The entrylist, published elsewhere in to-day's CALL, is large and representative, containing the names of all the prominent class A and B riders of this part of the State. It is questionable if the grand stand will be large enough to accommodate all those who wish reserved seats, the demand already has been so large. Clabrough, Golcher & Co., 605 Market street, have the reserved list. San Jose and Oakland will be represented, and every cyclist in this City who wants to be "in it" will be at Central Park next Thursday.