The addition of the San Francisco Bicycle Club has given the Olympic Cycling Annex a decided impetus. The directors are fitting up a room in the basement with all the necessary conveniences for the care and repair of wheels and have also assigned the annex a "home" adjoining the lounging room where wheelmen may discuss sprocket and tire undisturbed. All the cycling publications will be kept on file here.

A neat and dressy uniform has been adopted to which all will be expected to conform, and this is the only requirement to membership in the annex. There are several embryo "flyers" in the club and another season will see the red and white of Olympia somewhere near the van of the cycling column.

Captain Russ is alive to his opportunities, and makes an efficient officer, while Lieutenants F. Hunter and Haley are his right and left bowers. Last Tuesday evening that veteran wheelman, R. M. Welch, was elected presiding officer, and Lewis C. Hunter was elected secretary.

A run to Mill Valley has been called for to-morrow, leaving the clubhouse at 8:30 A. M.

It has attracted comment that the Olympic Club of this city, the oldest amateur athletic organization on the Pacific coast and assuming to be foremost in the encouragement of every form of sport, should have so long neglected cycling. It was not until the summer of the present year that any positive effort was made toward fostering this sport. A mere handful of enthusiasts within the club then induced it to open its doors to the old San Francisco Bicycle Club. Encouraged by the re-inforcements thus obtained the friends of cycling started in with great vigor to make their favorite sport a feature of the Olympic Club. It was first decided that the cycling section should be known as the Olympic Club Wheelmen. A distinctive but neat and serviceable uniform was adopted, consisting of cap, coat and knickerbockers of dark blue cloth, with white sweater, the cap and sweater bearing the emblem of the Olympic Club, the winged O in red. Joining the California Associated Cycling Clubs the wheelmen participated in the annual parade of the clubs at San Jose on September 9th last, and were awarded the prize for the most attractive appearance in line.

That there is much to be accomplished before the wheelmen of the club can hope to take a place in cycling equal to that occupied by the Olympic Club in other fields of sport is fully realized. Any man can ride a bicycle, but to carry the colors of his club to the front on the road or path calls for a high degree of physical excellence. The Olympic Club offers every facility for attaining this excellence, and that with proper encouragement racing men will be developed may be reasonably expected.

Officers and Directors Elected at the Meeting Held Last Evening. The Olympic cyclers held an enthusiastic meeting last evening and the large attendance of members indicated that the club is in perfect harmony and a thriving condition.

The principal object of the meeting was to elect directors and officers for the ensuing term. With but two exceptions the old board was re-elected, and there is no change in the officers. The directors for the ensuing term are: J. F. Coffey, J. H. Sheehan, S. J. Blake, T. B. McGinniss, F. R. Butz, Lloyd Conkling, Dr. O. B. Burns, Charles F. Morel, W. D. Shea.

It was decided to invite the Olympic Club wheelmen to a joint run with the cyclers at some near future date.

A special meeting will be held Friday evening, January 24, to receive a committee from the League of American Wheelmen, which will address the club upon the desirability of its joining the league. 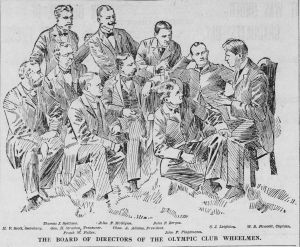